Hugo Chavez to take Venezuela's riches away from the West 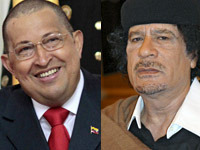 Venezuelan President Hugo Chavez has decided to secretly transfer the gold reserves and financial accounts of the nation to Russia and China. The news was voiced by representatives of the Venezuelan opposition. This is not a hoax.

Chavez's opponents refer to a certain document, which the president signed on August 12. Officials of the Venezuelan administration confirmed the intention. In the words from the President of the Central Bank of Venezuela, Nelson Merentes, the president hopes to diversify the currency reserves. The reserves are said to be invested in the markets of developing states, such as Brazil, China, India, Russia and South Africa.

According to Jorge Giordani, the Finance Minister of Venezuela, the weakening dollar, the danger of default in the USA and the ongoing crisis in Europe put Venezuela's national savings at risk. The savings, the minister added, would be safer at home and in "allied countries."

According to various estimates, it goes about 11-29 billion dollars. Julio Montoya, a spokesman for the opposition in the parliament of Venezuela, said that Chavez could invest as much as $6.3 billion in the developing markets. These cash assets are currently being saved on accounts in Western states: 59% - in Switzerland, 18% - in Britain and 11.3% - in the USA.

As for gold reserves, they are expected to be delivered back to Venezuela too. High-ranking opposition officials say that it goes about the withdrawal of gold bars (211 of the nation's 365 tons) from US, Canadian, British and Swiss credit organizations (JPMorgan Chase & Co., Barclays Pl, Standard Chartered Plc, Bank of Nova Scotia and others). Britain, for example, is the home to 99 tons of Venezuelan gold, which has been stored in the country since 1980.

Financial analysts believe that Hugo Chavez's decision is based on the growing prices on precious metals, as well as on the weakening of the American dollar.

As for August 16, Venezuela's total reserves in gold and currency made up $28.6 billion, of which only $7 billion were stored in domestic banks. The West had the lion's share of those reserves at its disposal. It means that the reserves could be confiscated any moment, as it previously happened to the accounts of Gaddafi, Ben Ali and Mubarak.

US economic strategist with Nomura Securities, Boris Segura, is certain that Chavez's actions are based on the risks to have the financial reserves frozen in case international sanctions are used against Venezuela.

Julio Montoya, a deputy of the Venezuelan parliament, an opposition leader, also thinks that the main reason behind such actions is the possibility to freeze the national financial reserves at the direction of the international community.

"While Venezuela's socialist government doesn't seem to see much cause for concern in the recent market turmoil, what does get its pulse racing is the fact that it has billions of dollars of foreign reserves stashed away in banks under the control of "imperialist" regimes," Britain's The Financial Times wrote. "Worrying that its foreign assets are in danger of being frozen one day, as has happened to Libya, the government is allegedly planning to shift its international reserves to banks in "friendly" countries - namely China, Russia and Brazil," the article also said.

Nevertheless, opposition claims that Hugo Chavez became a puppet of the BRICS countries. In the words from Julio Montoya, China, Russia and Brazil asked Venezuela to deliver the reserves to guarantee the loans, which the government had received during the recent several years.

It is easy to understand the anger of Chavez's opponents. It is an open secret that the West, the USA first and foremost, supports many of them. One of the reasons, which gave them an opportunity to receive large loans for their needs, was the presence of Venezuelan financial and gold reserves in Western credit organizations. As experience shows, the assets could always be withdrawn for the needs of "democracy" rather than "dictatorship."

There is nothing surprising about opposition activists claiming that Chavez uses the money of the country like the money in his own wallet. Spokesmen for Venezuelan opposition also say that the withdrawal of assets from the West will worsen the reputation of the country as a borrower. It depends on where you borrow from, though. Venezuela has been cooperating with China and Brazil at this point recently and preferred to stay away from the West.

Montoya virtually accused Chavez of the wish to receive profit from the deal. According to him, the international law stipulates guarantees of Western credit organizations, whereas the economies of such countries as Russia can not be considered favorable and stable.

During the recent 16 months, Caracas borrowed 34 billion dollars from Brazil, China and Russia. Twenty-eight billion of the amount were borrowed from China. One shall assume that the largest part of Venezuelan currency reserves will be transferred from Western to Chinese credit organizations.

British experts said that any dollar operations can be conducted with the consent or permission of US governmental agencies. This aspect can be used to interfere in the usage of Venezuela's reserves.

According to the above-mentioned opposition activist Montoya, the operation to withdraw gold bars and reserves from the West is to be completed before the middle of October. Afterwards, the US dollar, the euro and the British pound will no longer serve as the tools to support the national currency of Venezuela, the bolivar. This would cause an additional blow on the Western economy under the ongoing crisis.

Moreover, the financial markets of "free democratic" countries have already showed a negative reaction to Chavez's another challenge to the West. Venezuela prepares to nationalize its gold industry.

Venezuela is ranked 13th on the list of the countries with largest gold reserves. Chavez's intentions push gold prices even higher and cause damage to the economies of the countries that will soon lose Venezuelan gold.

Has Chavez gone too far this time? Washington has not been paying much attention to his notorious anti-American statements recently. It does not mean, though, that the US administration can be that patient in the future. It is an open secret that one of the reasons, which triggered aggression against Libya became Gaddafi's wish to put pressure on Western oil and arms companies.