Will Russia Stand Up to Syrian Challenge? 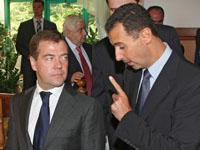 Pro-Western media are completing the "artillery preparation" against Syria. In the West they have already built an image of Assad as a tyrant hated by the people and who is inferior to Gaddafi only in terms of the degree of his undemocratic attitude. Now Western journalists are arguing how many "peaceful demonstrators" he has killed - one hundred, five hundred or two thousand. A special operation in a suburb of Damascus was made look like nearly a national uprising in the Syrian capital.

In fact, the Libyan case scenario is becoming increasingly important. Over the past two weeks, the sanctions against Syria were considerably toughened by the West. They began on May 9 with the restrictions on the movement of Syrian officials in Europe and on May 24 reached the point where Assad's accounts in Swiss banks were frozen.

In this regard, the West is trying again to push a low-cost solution in the UN Security Council, which would give them a completely free rein. It would seem that Russia and China have closed the case. In late April, the West has tried to hold favorable solutions through the UN Security Council, but was defeated. In fact, Russia and China then securely covered up their ally. But what will happen tomorrow?

According to several media outlets, on May 24 Russian President Dmitry Medvedev in a telephone conversation with his Syrian counterpart Bashar al-Assad pointed out to him the need to engage in a dialogue with the circles as wide as possible.

As pointed out by sources in the Arab countries, including Syria, Damascus was not given the names of specific representatives it could engage in a dialogue with. In return, Assad clearly stated that he would continue to "fight against extremists."

In this regard it is important to refer to the material of the Kuwaiti newspaper Al-Rai al-Ulam citing U.S. sources, according to which Barack Obama in the near future intends to discuss with his Russian counterpart Dmitry Medvedev the situation in Syria and the question of tightening the sanctions against the regime of Bashar Al-Assad.

Now the moment of truth has come. Talking about the distant Syria one should be aware that Russia's conduct in this matter would mean a lot. It has nothing to do with the fact that it is virtually the only foreign country on whose territory (the port of Tartus) a base of Russian warships is located.
Russia's strange behavior with regard to Gaddafi has caused many in the Arab world to become suspicious. Syria is something even more important for the country than Libya. Almost since the founding of the independent Syrian state this country was entirely within the orbit of Moscow's influence.
Obviously, in terms of economic cooperation and net profit Libya was in a better position for Russia because the oil and gas reserves in Syria are only a fraction of what Libya has.

However, apart from purely economic considerations, there are no less important geopolitical ones. Of course, in terms of human resources or raw materials Syria does not reach the parameters of Egypt or Saudi Arabia, and therefore cannot be considered a leader in the Arab world. At the same time, it is considered one of the most important Arab countries, whose opinion is vital for solving problem in the region.

Russia's alliance with other Arab countries like Egypt and Iraq was likely temporary rather than permanent. The situation with Syria is quite different. Russia does not have any other country like this in the Arab world since Algeria and Libya over the past decade have significantly diversified their connections.

Maintaining its dominant influence in this country, Russia could at least count on the fact that its voice in the Arab world will be heard. In many respects, this situation has persisted because of Russia's close contacts with Assad. If Russia chooses to yield Syria to the West, thus paving the way to the rebel power backed by the Western countries, there are very serious doubts that the succession will continue.

However, the issue is not limited to the Arab world only because Russia's future actions in respect of this country will become a litmus test of sorts.

When placing a military facility in Syria, Russia was pursuing well-defined goals. For Russia that has its own interests in the world, the acquisition of a base that could possibly be deployed into a real naval base in the Mediterranean was a real advantage.

However, stating the allied relations with this country, Russia automatically assumed certain obligations, in fact, guaranteeing Syria its military and political integrity.

If now Russia suddenly betrays its ally acting as it did in case with Libya, the independence of Russia's foreign policy will be questioned and the country's prestige around the world will be destroyed.

If this happens, few will want to deal with Russia, because there is no point in having relations with the country that makes ambitious statements in the spirit of great power, but conducts such a bizarre policy in respect of its allies.