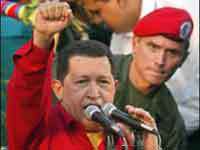 It seems that the United States has yet another problem: Venezuelan nuclear program may be added to the Iranian and North Korean nuclear programs in the near future. The announcement was made the other day by "fierce" Hugo Chavez. Expert Vladimir Khrustalev spoke of the reasons of such intentions and the prospects of a nuclear project in Venezuela with Pravda.ru.

The world may see another nuclear power, just next door to the U.S. On September 27, Venezuelan President Hugo Chavez said that Caracas carries out a preliminary assessment of opportunities for the development of national nuclear program.

Here is the statement of the head of the South American country: "We undertook this nuclear energy project for peaceful purposes, and no one will stop us. We need this program and now we are conducting initial preliminary tests."

As stressed by the Venezuelan leader, the event is "exclusively peaceful in nature," and his country does not need nuclear weapons: "Who in Venezuela will take up this project? Who? We will not do that."
However, it is unlikely that these words will be sufficient for the United States. It would be naive to believe that Washington, vainly trying to resolve the Iranian nuclear issue, would welcome such initiative from Venezuela.

Iran has also declared a purely "peaceful nature" of its nuclear program. At the same time, the American political elite ignores the existence of nuclear weapons in Israel which refuses to accede to the Non-Proliferation Treaty.

US's Selective approach to the nuclear issue is quite understandable. Washington has long been guided by loyalty to a particular regime in its policy. As we know, neither Iran nor Venezuela are "American villains."

Moreover, the regime of Chavez is a major troublemaker in Latin America, which has traditionally been considered the "American backyard." Transformation of the country into nuclear power would be a very unpleasant surprise for the United States.

After all, will Venezuela be brave enough to implement such an ambitious project? And can we explain such a tendency only by the current energy crisis in the country? Vladimir Khrustalev, an expert on nuclear technology of the Maritime State University named after Admiral Vladimir Nevelsky, shared his thoughts with Pravda.ru.

"Hugo Chavez's interest in developing his own nuclear power is well grounded," the expert believes. "The stakes on hydropower were not justified. Presence of nuclear power plants can solve many of the current energy problems Venezuela has, and reduce the consumption of hydrocarbons.

In terms of practical moment - the implementation of this ambitious task - Venezuela is not able to do it independently, without external assistance. This also applies to the "peaceful atom" and prospects of possessing nuclear weapons. The key issue is lack of properly skilled scientific and engineering personnel in sufficient numbers.

With regard to its nuclear program, given the state of the market, just a working nuclear power station is only a matter of payment. Various large corporations can build and run such a facility. Nuclear power is the most important key technology, the possession of which greatly improves the status of the country. As for the "peaceful atom," for the third world countries the possession of nuclear power plants is a matter of national prestige, which is sort of a symbol of independence and a place in the club of the "advanced." This is something like the Soviet idea of electrification of the entire country.

With regard to the prospect that after the obtainment of "peaceful atom" Venezuela would wish to obtain a "nuclear big stick," this option also cannot be ruled out. However, it should be regarded as a more distant prospect, and then only when the situation in the region changes as a whole (so far there is no noticeable nuclear incentive).

The presence of nuclear weapons, as many regimes opposing the USA would expect, will minimize the development of scenario similar to Iraqi one. The Iranians, Brazilians, and North Koreans would be able to help solve this problem in case of such a decision.

Speaking about the interest of Venezuela in acquiring nuclear technology and its wider application, it is necessary to bear in mind that this is characteristic of other Latin American countries. Brazil achieved the greatest success in this. At one time, along with Argentina, it has shown great interest in this topic. However, in recent years the tendency towards revising the country's relations to nuclear weapons is observed in Brazil. Today it is also another symbol of power and political independence. That's what Latin American countries are striving for now".