Nuclear present for Russia from Mr. Obama, the Peacemaker 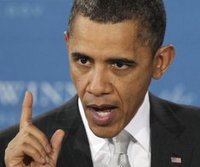 Against the background of "peacekeeper" Obama's calls for the universal nuclear disarmament, the United States intends to increase the power of its strategic arsenal. We are not talking about issues related to further development of U.S. missile defense system. This is the key point of the START-3 that the country refused to include at the end of the day.

This time, the command of the U.S. Air Force intends to modernize their existing nuclear bombs B61. As stated by U.S. Secretary of Defense Robert Gates, the goal of modernization is not an increase of capacity, but increased safety, reliability and service life of the weapons systems.

He is echoed by American military experts who say that the U.S. is not violating any agreements with Russia and that Moscow cannot have any complaints to Washington, because this is the issue of ensuring reliable operation of U.S. defensive arms without the additional production of new weapons or introduction of additional capacity.

However, a number of scientists believe that the commanders and politicians are not openly telling the entire story. According to Hans Kristensen, a specialist on nuclear weapons with the Federation of American Scientists, the modernization of these bombs could make them more powerful, which contradicts earlier policy for universal nuclear disarmament proclaimed by the president. The expert believes that it is impossible to modernize without increasing capacity. As a result, he thinks that the military may find such a weapon suitable for liquidation purposes, while previously such weapons were unavailable because of too much collateral damage.

His colleagues made more open statements, saying that the implementation of the above mentioned plan will increase not only the capacity but also the accuracy of the nuclear warheads.

Judging by the publications in the American press, the plan has been already approved by President Barack Obama. The project cost is estimated at four billion dollars. We should also bear in mind that in this case it is only a part of the implementation of a global plan to strengthen the power of the U.S. strategic arsenal. Over the next 10 years it is planned to spend $80 billion.

Further, the first weapons to be upgraded are stored "in the neighborhood" of Russia in Belgium, Germany, Italy, Netherlands and Turkey. Particularly significant is the fact that the United States steadfastly refused to clean out their strategic arsenals in these locations even after the end of the Cold War. More than that, it even refused to discuss specific bases where they are stored.

According to the information from the Office of Nuclear Security (NNSA), it is necessary to ensure the protection of European states promised to them under North Atlantic Treaty Organization.

The whole issue is who they are going to protect them from. From Iranian ballistic missiles yet again? How is this consistent with the previous agreements under START-3? Leonid Ivashov, former head of the International Military Cooperation with the Russian Ministry of Defense, president of the Academy of Geopolitical Issues, answered these questions in an interview with Pravda.ru.

"Americans are not in violation of START-3. There were too many contradictions on other points of the contract at the time and apparently we proceeded from the assumption that, if focused on the ability or inability to modernize nuclear weapons, signing a final agreement could still be in the air.

In any case, such plans are contrary to the Obama's declarations of comprehensive nuclear disarmament. Thus, we see that after the signing of START-3, American strategic arsenal, in fact, is not reduced. We, on the other hand, have to reduce their nuclear forces.

Of particular concern is the fact that the U.S. intends to modernize its nuclear bombs stored at our borders. Of course, all this is directed against us. The Russian side has tried before to raise this question and initiate a discussion regarding the possibility of placing nuclear arsenals of the United States in the countries of Eastern Europe seeking membership in NATO, but the Americans were very evasive in this discussion. Their answers boiled down to the fact that "we cannot prevent and prohibit members of the alliance to have such weapons on their territory, since they are all equal."

It is beneficial for the Americans. One of the main problems for them now is to achieve reduction of our power at the expense of Russia's nuclear potential. In fact, at the moment we are the only ones who can compete with them in this regard. Developing missile defense, and seeking further reduction of our nuclear weapons, they reduce our benefits to zero. Today we see yet another "gift" from the U.S. coming from the Black Sea in the form of a cruiser equipped with a missile defense system. There are no guarantees that it will not remain there. However, most likely, nothing will prevent it and other like ships from going there again if need be. In fact, we find ourselves in a situation of confrontation in terms of conventional weapons, where we are greatly inferior to only the U.S.

There is more to it. Washington is also developing rockets capable of carrying nuclear charges, increasing their capacity and radius. These and other challenges are capable of shattering our confidence in our security behind the nuclear shield. They are also creating a new class of nuclear weapons whose deployment in certain areas may cause natural catastrophes like strong earthquakes and tsunamis.

Against the backdrop of the recent tensions between Russia and the United States on missile defense, the ambitious plans to modernize the U.S. nuclear arsenal cannot but lead to certain conclusions. This is the "peacemaker" Obama. Of course, it is not right to blame everything on the American president who is a puppet in the hands of the oligarchy that controls the largest corporations. 100 years ago, Jack London described it as "plutocracy." In fact, Obama is only the "voice of Sauron", the mouthpiece of these plutocrats who are trying to fulfill their goals in the world.

Yet, did we have to deceive ourselves and sign START-3 that is not worth a damn, if it does not limit the possibilities for improving the U.S. cruise missile, development of hypersonic weapons, missile defense and the modernization of U.S. nuclear arsenal?

Was it worth agreeing to further reduction of our nuclear arsenal, when Obama began to insist on reducing tactical nuclear weapons within the general concept of universal nuclear disarmament in the world?

Of course, Americans once again demonstrated that the agreement with them is tantamount to a transaction with a card cheat who has been already caught cheating and promised this time to play "honestly." At one time we have been already successfully cheated in the implementation of previous agreements. While Moscow has destroyed its nuclear arsenal, Washington simply stockpiled theirs, forming the so-called "breakout capacity" which could be brought on a war footing in the matter of hours. It would be naive to expect honesty from those who have deceived us before.

At the signing of START-3 we "cheated" ourselves. Not being able to "notice" at least three weak points at the conclusion of such an important contract is too much. However, the recent actions of the Americans on missile defense and the intention to modernize their nuclear arsenal are fully sufficient grounds to revise certain provisions of START-3. And, of course, after this all the talks about reducing our tactical nuclear weapons must be stopped. It would be ridiculous to get fooled like this again."