Russia will work on a new generation of atomic weapons to strengthen its nuclear deterrent, President Dmitry Medvedev said on Thursday, just hours after Moscow test-fired one of its most feared missiles. 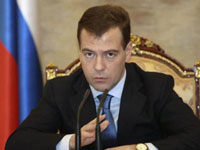 Medvedev said that Russia and the United States were close to a landmark deal on cutting arsenals of Cold War nuclear weapons, but that Moscow would still push ahead with the development of new strategic offensive weapons.

"Of course, we will develop new systems, including delivery systems, that is, missiles," Medvedev told the directors of Russia's three main state-controlled television channels, Reuters informs.

In a live interview to Russia's three main TV channels, he predicted that the country could see a growth of 2.5-5 per cent next year, depending on the scenario. Russia suffered 8.7 per cent GDP drop in 2009, he said.

"We are absolutely sure that, without urgent modernisation, the Russian economy has no future, even with the enormous natural resources Russia has," Medvedev said, The Economic Times informs.

President Dmitry Medvedev said on Thursday he and his predecessor and current Prime Minister Vladimir Putin have retained friendship.

"Relations of friendship have not changed, and I am sure they won't," Medvedev said during a live interview with three state channels in which he gave an overview of the outgoing year.

Medvedev, chosen by Putin as his successor, is believed to have played second fiddle under the powerful premier. However, he has recently come to the foreground with an independent political line.

Media have reported growing frictions between the president and premier, who vowed to run the country in tandem. Both have not ruled out that they will run in the 2012 presidential elections, RIA Novosti informs.