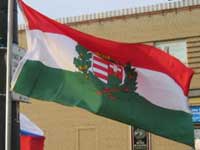 Hungary has recently adopted a new constitution whose many provisions openly contradict the current secular and liberal foundations of the European Union and the Council of Europe. Some parts of the document resemble a political bomb.

The discussion of the basic law of the country was commenced in Hungary last year at the initiative of Prime Minister Viktor Orban. Back then the EU and the Council of Europe began to voice their objections. For example, they stated that the document excessively strengthened the authority of head of the government and cut many democratic freedoms, infringing the rights of sexual and other minorities. However, the admonition did not help.

Despite the behavior of the liberal left and right-wing opposition whose representatives ostentatiously left the meeting hall of the Hungarian Parliament, on April 18 the document has been adopted. The opposition rallies were organized at the Parliament building, demanding to stop the slide of the country to a "clerical dictatorship." Germany's Chancellor Angela Merkel expressed her concerns. UN Secretary General Ban Ki-moon urged the Hungarians "to seek advice from the UN and the EU."

Representatives of the liberal European circles have decided to move from words to action and make the Magyars revise the document. In May, on behalf of the Parliamentary Assembly of the Council of Europe (PACE), an international commission that will examine the constitution of Hungary for conformity with the democratic standards will commence its work in Budapest. Amnesty International has already made its conclusion: the Constitution does not conform.

Unflattering comments of the liberal press in the West about the main Hungarian law were countless. The most telling was an article in the Italian newspaper La Repubblica. It stated that God and the Motherland were Magyar's national pride, the state was not called a republic, the right to the Constitutional Court was taken away, and the executive bodies received more power over the courts and the media.

The Italian journalists wrote that it seemed that we were talking about 1920's or 1930's in authoritarian Europe, but in fact this was a new constitution of the country that had the Presidency of the European Union and is a member of NATO. They believe that Europe is moving away from the basic values ​​of the rule of law and that the family and the Church, as well as the protection of the embryo, were a priority. They added that there was no mentioning of minorities, Jews, Gypsies and gays in the Constitution.

"The new Constitution legitimized the authority of the Council over the media. Its leaders would be elected by the Government for nine or twelve years. The Special Board of the National Bank, appointed by the prime minister, will have veto power in regard to the provisions of the budget. Orban wants to legitimize his dictatorship," the Socialist leader Attila Mesterházy supported the foreign criticism.

The criticism did not help. The President and associate of Prime Minister Pal Schmitt signed the constitution and on January 1 of 2012 it will enter into force. "We will not allow Brussels to dictate their terms to us. Never in our history had we allowed Vienna or Moscow to tell us what to do, and now we will not allow it to Brussels. May the Hungarian interests prevail in Hungary," Orban answered to all the attacks from abroad.

What caused this all-Europe storm? One of the controversial statements from the standpoint of modern liberal society says that the Hungarian nation is united by "God and Christianity." This is understandable. In the vast majority of the EU countries religion is separated from the state and European policy makers are rarely seen at a public event in a church.

There is also a political component to this situation. Many human rights activists do not like the fact that the Constitution refers to only Christianity, but says nothing about Jews or Muslims. However, Orban can easily and convincingly fend off such accusations. Neither Jews nor Muslims constitute a significant percentage of the population. Moreover, neither are indigenous peoples of Hungary. In addition, the Hungarian state has historically been built on the Christian foundation.

Another controversy is related to abortion. Hungarian Constitution declares the right to life from the moment of conception. There is no direct ban on abortion, but the allusion is perfectly clear. Hungary may become the second (after Ireland) EU country where abortion is banned. Likewise, marriage in the basic law of the country is defined as a "union between a man and a woman." That means that no same-sex unions will be recognized, which contradicts the European political practice of recent years.

The provisions relating to the powers of the state bodies are not favored by many legislators. The main arbiters of the political fate of nearly all European countries are constitutional courts where all citizens can file a claim. In Hungary, ordinary mortals will be deprived of this right. Now only the president, the government and at least a quarter of MPs may file a claim with the highest judicial authority.

Many other provisions of the document are also contrary to the modern European practices. For example, parole for those sentenced to life imprisonment has been repealed. This is obviously inhumane. However, the Hungarian government can once again fend off the accusation by saying that life imprisonment in Europe is the punishment for murder and replaces capital punishment. In addition, no one seems to be talking about the restoration of the death penalty.

Many Western commentators are also dissatisfied with the fact that the country is renamed from the Republic of Hungary to Hungary, and the crown of St. Stephen will be returned to its coat of arms. This is a direct allusion to the continuity of the medieval Hungarian kingdom that occupied the territory twice as large as today's Hungary and included the entire territory of Slovakia, the Ukrainian Carpathians, the Serbian Vojvodina, nearly all of Croatia, part of Austria and Slovenia, and half of Romania.

Orban's detractors remember that this symbol was the emblem of Hitler's allies - the Hungarian dictator of 1920-1944 Miklos Horthy and Ferenc Szalasi. Indeed, in those years, Hungarians have committed many crimes, including anti-Russian, anti-Serbian and anti-Jewish ones. Yet, isn't the French flag desecrated by the crimes committed in the colonies? Wasn't the flag of Britain used by those who built concentration camps for the Boers in the early twentieth century? What about the German eagle and white Polish eagle?

Viktor Orban likes to speculate on the topic of giving Hungarian passports to the tribesmen from the neighboring countries, which could later lead to the remapping of the borders in Europe. This is obviously dangerous. However, can we pretend that the issue of over three million Hungarians who have been outside the ethnic homeland does not exist? The EU removes itself from the solution of this issue, and it is becoming more acute. Who, one might ask, should raise it but Hungary and personally its Prime Minister?

The current constitution of Hungary is a direct challenge to the liberal foundations of the European Union. Now it will be harder for the officials in Brussels to pretend that the continent does not have Christian roots and that abortion and gay marriage is an integral part of the civil liberties, and that the national issue in the EU has been solved once and for all.