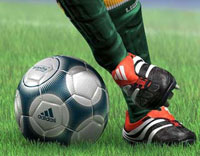 “I believe there is an 80 percent chance of an attack,” Ronald Sandee, director of the NEFA Foundation Information said in an interview with The Sunday Times.

“Our information confirms that several venues will be targeted, some simultaneously, others at random. Reference is also made to the possibility of a kamikaze-type attack," he added.

He said that numerous references were made to World Cup attacks in closed-frequency radio broadcasts and phone intercepts in Algeria, Mali, Pakistan and Yemen. NEFA warned of Pakistani and Somali militant training camps in neighboring Mozambique and said trainees may have crossed into South Africa to join or set up cells to plan attacks.

Recently, the United States warned that large events like the World Cup could represent attractive targets for terrorists.

While South Africa was not affected by terrorism in the recent years, it became evident that several militants connected to terrorist attacks in other areas have visited the country.

The National Joint Operational and Intelligence Structure (NATJOINTS) was created to prevent terrorist attacks and provide safety during the Worlds Cup. A watch list of 40 terror suspects was compiled, and one of them was arrested. There was no official confirmation or rejection of this information. Earlier there were threats against teams of Denmark, the Netherlands, the US and England. Most of the threats came from al Qaeda.

There are multiple regional branches of the organization in South Africa, including Somalia Shabab and Yemen al Qaeda.

Terrorists attacked a hotel with Israeli tourists and shot a passenger plane. Local militants are real professionals who know where to move, have cover up businesses and use transparency of the borders.

Italian newspaper Corriere della Sera warns about al Qaeda intentions to interfere with the World Cup. Referring to the statements of an Islamic commentator, Corriere della Sera observer mentioned that group C that includes Great Britain, the US, Nigerian and Slovenia may become the first target of terrorists.

According to jihadi author "'Ubada Bin Al - Samit " the June 12 USA vs. England match, scheduled for live broadcast, is the terrorists’ top priority. Germany, France and Italy may also be targeted as the countries taking part in the Zionist-Crusader campaign on Islam.

Talking about preparedness of the security services for the attacks, Al Samit mentions the recent attacks by Al Qaeda, including an assassination attempt of Saudi Prince Mohammed bin Nayef, and the attempt made by the Nigerian Umar Abdulmutallab to blow up an American passenger plane on Christmas Eve on December 2009. These incidents should be an evidence of al Qaeda’s ability to sneak through check points.

Corriere della Sera wrote that the statements could be merely a PR move or they could be a hidden strategic maneuver, aimed at pressuring security services before the World Cup and misleading them. Or, it might be a call for those who dream of becoming “martyrs” taking into account the advantageous conditions in South Africa.

In 1998 al Qaeda planned terrorist attacks during the French World Cup. Ten years later they issued threats of attacks during Euro Cup in Austria and Switzerland.

In 2008, the Islamists said they would conduct terrorist attacks if the Austrians failed to withdraw its troops from Afghanistan and the Swiss did not stop interfering with the construction of mosques. Commenting on the Islamists’ threats in 2008, the chief criminalist of Austria said that on the eve of large sports events there were always threats of possible attacks.

Fortunately, there were no incidents during the Euro Cup. Yet, since the tragedy during the Munich Olympics the security services of sports championships treated all the threats seriously.

During the 1972 Summer Olympics in Munich, West Germany, 11 members of the Israeli Olympic team (4 coaches, 5 athletes and 2 referees) and one policeman were taken hostage and eventually murdered by the militant group Black September.

Although all organizers of the attack were eliminated within several years after the attack, sports championships were frequently targeted by terrorists.

Today’s terrorism took new, crueler forms. Now terrorists try not to take hostages but physically eliminate the objects of their attacks. Al Qaeda is getting ready to throw its new suicide bombers into action.