Terrorism and Human Rights: Where to Draw the Line?

The British Court of Appeal has made a ruling which irritates the British and US Governments, namely standing up for human rights and denouncing inhumane and barbaric practices perpetrated in secret by security forces against suspected terrorists, while reversing a decision to “doctor” a report, censoring seven paragraphs which might harm US-UK relations. 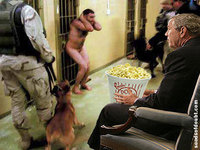 Terrorism and Human Rights: Where to Draw the Line?

For those of us who thought we lived in a world where universal values of common decency were the rule and not the exception, this case is a sickening reminder that behind the smiles and handshakes of those who claim to be our democratically-elected leaders, those who take pot-shots at Russia with veiled remarks about dictatorship and democracy, there hides a sinister system whose modus operandi is skulduggery, deceit and secrecy. We are not speaking about Vladivostok, Omsk or Tomsk. We are speaking about Washington DC and London.

The case in question revolves around Binyam Mohammed, a British resident who was tortured by the CIA with the involvement of MI5. Mohammed’s declarations about his horrific treatment after he was abducted in Pakistan in 2002, taken to Morocco and then to the concentration camp at Guantanamo Bay, were deemed to be truthful by a US court. The CIA sent 42 classified documents to the British authorities about the case of this Ethiopian-born British resident. These documents were summarised in seven paragraphs.

These were considered by the British authorities to be embarrassing to the Americans and potentially damaging to joint intelligence operations. After a High Court ruling in October that the seven-paragraph summary should be released, the British Foreign Secretary, David Milliband, appealed.

Worse, the reports revealed that at least one MI5 operative was present during the interrogation in Pakistan and was aware of the fact that Mohammed had been tortured. The Court of Appeal turned down the Foreign Office’s attempt to suppress the summary of Mohammed’s interrogation and Lord Neuberger, Master of the Rolls, drafted a blistering criticism of MI5 yet before it was published, the Government’s chief lawyer in this case, Queen’s Councillor Jonathan Sumption, wrote to the Court of Appeal asking the judges to reconsider the draft, describing Neuberger’s comments as “exceptionally damaging” to the Security Service.

Finally it was only decided to release the seven-paragraph summary after the Guardian newspaper, other media organizations and Liberty and Justice contested the decision to suppress the draft, claiming that Neuberger had made a private agreement with Sumption without informing Mohammed’s lawyers.

Here are the seven paragraphs summarising the CIA’s actions while detaining Binyam Mohammed, who was released without any charge being brought in 2009:

“It was reported that a new series of interviews was conducted by the United States authorities prior to 17 May 2002 as part of a new strategy designed by an expert interviewer.

v) It was reported that at some stage during that further interview process by the United States authorities, BM had been intentionally subjected to continuous sleep deprivation. The effects of the sleep deprivation were carefully observed.

vi) It was reported that combined with the sleep deprivation, threats and inducements were made to him. His fears of being removed from United States custody and "disappearing" were played upon.

ix) We regret to have to conclude that the reports provide to the SyS [security services] made clear to anyone reading them that BM was being subjected to the treatment that we have described and the effect upon him of that intentional treatment.

The point is not whether the world’s security forces should offer terrorists non-alcoholic champagne breakfasts, seventy virgins or all-expenses-paid trips to Mecca. Executive class, all frills, of course. The point is that the United States’ authorities knowingly perpetrated acts of torture not only in Pakistan and Morocco but elsewhere, against US law, and were careful to perpetrate these outrages against human rights in the legal limbo of aircraft in flight, on vessels at sea and in the territory of carefully chosen third parties. After all “torture flights” are not that difficult to track upon analysis of slots records at airports. The point is that the British authorities acted in collusion with these torture-chamber methods of interrogation. The point is that when the truth came out the authorities attempted to cover it up and the point is that when the legal system was set into operation, attempts were made to tamper with it.

So do we live in a world in which death squadrons are sent to roam the streets of Damascus, Khartoum, Tripoli, Bamako, Karachi, Jakarta, Mogadishu, Kandahar and the Mountains of Kashmir to exterminate males under the age of ten under the pretext “Today a child, tomorrow a terrorist”?

Or do we live in a world in which the terrorists are the only “bad guys” in the cowboy movie and in which the “good guys” act according to the rule of law, act in accordance with due process which took centuries to take hold and act in a good-principled, civilized manner which follows the norms of transparency, good faith and common decency?

If not, then we may conclude that “human rights only exist for those who behave like human beings”. However despicable, horrific, cowardly, and downright evil the actions of a terrorist may be, killing innocent people indiscriminately, how dangerous it will be if those unelected grey sinister men who really govern us ever get to be those who decide.