Oldest Person in the World Lives in Cuba

According to civil registry documents, she was born on February 2, 1885, in the village of Santa Rosa, where she continues to live. This makes the Cuban woman, Juana Bautista de la Candelaria Rodriguez, 125 years old, perhaps oldest person on Earth. 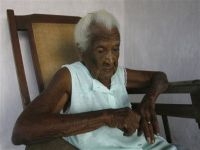 Oldest Person in the World Lives in Cuba

A party marked the occasion of her 125th birthday last weekend in the city of Bayamo in Granma province, attended by Rodriguez's family, including 15 great-grand children and four great-great-grandchildren.

Senora Rodriguez is known affectionately as "Candulia," In a phone interview with Cuban media, she said she was happy and looking forward to many great years ahead.

The Guinness Book of World Records claims to have never heard of the case. Supposedly some sources are not certain if she is really that old, even though official records have been located.

“We currently have not received a claim relating to the individual,” spokesman Philip Robertson told The Associated Press on Tuesday. Robertson said Guinness gets claims via its Web site about once a week involving people who say they or someone they know have broken age records. After an especially old person’s age is verified, or death is reported, the number of claims usually spikes.

He said the company only sends genealogists and other experts to trace family histories for the most promising reports, however, and few are authenticated.

Guinness is currently reviewing claims for the oldest living person after Georgia-native Gertrude Baines died last year at 115. The highest fully authenticated age was 122 years, 164 days by Jeanne Louise Calment, who died in 1997 in Arles, France. Seems time for Guinness to get with the program. The average life expectancy for women in Cuba according to statistics is 105, so this woman’s claims are without a doubt accurate.

One of the reasons for increasing longevity in Cuba are the advances achieved in social and health services on the local level, in the polyclinics and with family doctors that come to the homes of more fragile individuals. According to the last census of inhabitants and housing there are more than 1,800 people over 100 years old, while 46,000 persons surpass 90 years of age in Cuba.

Further demonstrating Cuba's commitment to its older citizens, the University for Older Adults is sponsored by the Cuban Workers’ Confederation (CTC), to which all the country’s trade unions are affiliated; the Higher Education Ministry (MES), particularly the University of Havana Faculty of Psychology; and the Cuban Pedagogical Association, which has ties with the Education Ministry. There are about 900 branches of the university along the length and breadth of the country, and more than 50,000 people, most of them over 60, have taken its courses there.