The plight of the 8,000 women raped in the Democratic Republic of the Congo last year sums up the wider issue of the deplorable situation which many women face on a daily basis. Nearly half of the world’s women suffer some form of physical and/or sexual violence at least once in their lifetimes, while in some countries the figure reaches 87 per cent. 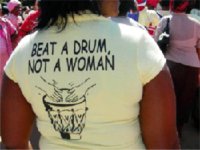 The women and girls living in the eastern DR Congo have nowhere to turn to because the three armed forces in the area, the Lord’s Resistance Army (LRA) in the north, the Hutu rebel Forces Democratiques de Libertation du Rwanda (FDLR) in the east and the DR Congo Armed Forces (FARDC) in the west and south have one thing in common: they rape and torture.

Between them, they rape an average of 160 women in Kivu provinces every week while many of the one million displaced persons in 2009 are also women, as are most of the 1,500 persons abducted by the LRA.

While the international community tries to draw up universally recognized and implemented legislation (for example, CEDAW, the Convention on the Elimination of All Forms of Discrimination against Women), the reality suggests that levels of violence against girls and women have reached pandemic proportions.

On a global scale, up to 60 per cent of women experience at least one incident of physical and/or sexual violence in their lifetimes, while the prevalence ranges from between 15 per cent at the lowest (urban centers) to 87 per cent at the highest (Afghanistan). The average is between 30 to 60 percent, the middle point being 45%.

According to a survey carried out by the World Health Organization, for girls and women aged between 16 and 44, rape and domestic violence proved to be more dangerous than cancer and motor vehicle accidents, while there is a direct link between rape and HIV and AIDS incidence.

This violence causes irreparable psychological and physical damage and spreads across all continents, all professions, the city and the countryside, all age groups and professional classes. The lowest common denominator is a three-letter word: Men. This gender-based violence affects productivity, development, well-being, increases endemic poverty and reduces economic growth In the USA alone, the US Centers for Disease Control and prevention estimate that intimate partner violence creates a cost of almost 6 billion USD per year.

Progress and the future

Progress is being made. Higher levels of education among women and changing attitudes among men are reducing the propensity for gender violence in urban centers. 89 states have some form of legislation which protects women specifically and a growing number of countries have action plans. However, in 53 nations marital rape is not an offence and 102 countries have no legislation against domestic violence.

UNIFEM tries to tackle gender inequality by creating partnerships with governments, civil society and the UN system, by supporting the collection of data on gender-based violence, by implementing prevention at grass-roots level and by supporting campaigns such as Say No to Violence against Women.

In a world in which the globalization of values is now a reality, it is also up to women to mobilize themselves and enforce their birthrights and it is up to men to ensure that those who perpetrate violence against women are treated as the undesirables they are…they certainly are not Men.