The relations between the US and China have worsened significantly over the last weekend. As a response to the US plans to sell a large batch of arms to Taiwan that Beijing considers a part of its territory, China threatened to introduce sanctions against a number of US companies. China also suspended military exchanges with the US. 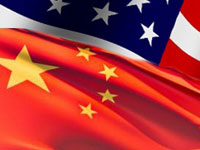 The scandal erupted on January 29, when the United States of America announced the planned arms sales to Taiwan, the largest arms deal in history of the two countries. The US plans to sell Taiwan Patriot Advanced Capability-3, Black Hawk helicopters and equipment for protection of the island’s communication systems. The deal is worth $6.4 million. In the future, Taiwan may spend another $0.5 billion on spare parts.

The agreement regarding this deal was reached back in October 2008 under Bush administration. China was angry because it considers the Taiwan government separatist, and all deals made with it unlawful. Beijing froze the military dialogue with the US in 2008, but it was resumed in the beginning of 2009 when new administration took office in Washington.

In November 2009, Barack Obama visited China. He claimed that he supported the one-China policy, which means he did not recognize the independent Taiwan government. He said he was hoping that Beijing and Taipei would soon be able to solve all of their issues.

It turned out that the Americans did not intend to stop arming the anti-communist Taiwan government, which they have been doing since 1949. China was quick in its reaction. On January 30, the US ambassador to China was called to the Chinese Ministry of Foreign Affairs. China expressed its protest with regard to the US intent to complete the Taiwan deal.

China's Vice Foreign Minister He Yafei said that the US actions "cause consequences that both sides are unwilling to see."

China's Defense Ministry had even stronger reaction to the deal. They said the arms sales would cause "severe harm" to overall U.S.-China cooperation. Defense Ministry said the Chinese military would fight any move to hurt the country's sovereignty.

"We will never give in or compromise in this issue," the Defense Ministry spokesman said in the statement. Chinese military officials asked the US not to break Taiwan-related obligation it undertook. They most likely meant the American-Chinese agreements of 1979 and 1982 that talked about the respect of territorial integrity of the partner and non-interference with internal affairs.

Yet, the US stands by its right to sell arms to Taiwan. US State Department spokeswoman Laura Tischler said the sale “contributes to maintaining security and stability across the Taiwan Strait”, a viewed echoed by Taiwan President Ma Ying-jeou. “It will let Taiwan feel more confident and secure so we can have more interactions with China,” he said.

Beijing reacted promptly, saying that “The planned US arms sale sends the wrong signal to Taiwan and will only encourage the arrogance of Taiwan independence forces and hinder the peaceful development of cross-strait ties.”

On January 31, China imposed sanctions against two American firms who actively participated in the arms deal. A Chinese newspaper reported on Sunday that the US decision to trade with Taiwan will cause virtually complete freeze of the countries’ military exchange.

According to the newspaper, Robert Gates, head of Pentagon, will not be visiting Beijing. The heads of general staff will not exchange visits, and military ships will not be coming to the partner’s ports. China has also halted Chinese-American consultations on the issue of the strategic safety, arms control, and nonproliferation of weapons of mass destruction.

This scandal is not the first one in the relations of America and China this year. Within the last month, the two countries had blamed each other for violation of the WTO rules.

It seems that the Taiwan issue will remain a bone of contention in the future. For the US, the ability to supply arms to the island is a symbol of superiority over China. For China, the cessation of this supply would be a signal of strength and ability to challenge the US, at least in the Far East region.

The exchange of sharp moves in the struggle for actual control over the island will continue. No one is intending to yield.