Ban fireworks to save the planet

The Fourth of July, also known as Independence Day, is an American national holiday which celebrates the founding of the American nation. The USA's official National Anthem, "The Star-Spangled Banner," which was written by Francis Scott Key in 1814, was inspired by Key's witnessing of the bombardment of the USA's Fort McHenry by the British Royal Navy during the Battle of Baltimore in the War of 1812. "The Star-Spangled Banner" includes these lines: 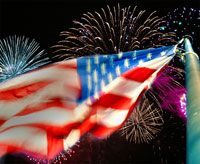 Ban fireworks to save the planet

"...and the rocket's red glare, the bombs bursting in air, gave proof through the night that our flag was still there."

Americans celebrate the Fourth of July with martial parades, nationalistic speeches, and lots of fireworks. On the evening of the Fourth of July, when most of the public and private displays of fireworks are presented, the airshed in many American cities and towns becomes polluted with the acrid, toxic smoke from many thousands of fireworks. People who are sensitive to smoke are advised to remain indoors, and household pets are terrified by the jarring blasts that pierce every neighborhood.

The detonation of fireworks releases many toxic compounds into the atmosphere, including sulfur dioxide, nitric oxide, potassium nitrate, nitrogen dioxide, heavy metals, and ozone. The color-producing ingredients of fireworks include potentially toxic elements such as strontium, titanium, mercury, lead, antimony, barium, copper, aluminum, and lithium, and also various chemicals which combine to produce deadly chlorine gas. The use of fireworks contributes to the production of smog, acid rain, water pollution, and noise pollution. The carbon dioxide that is released by fireworks may also contribute to Global Warming.

With all of the concern that has been generated by the threat of carbon dioxide-caused Global Warming, and considering that many governments are proclaiming that everyone should do whatever they can to 'reduce their carbon footprint', it surprises me that governments and citizens continue to indulge in fireworks displays, which are an enormously wasteful and unnecessary greenhouse-gas-generating activity. Could it be that those governments and those citizens are not really sincere about reducing their carbon dioxide emissions and saving the planet?

Surely we can all stop using fireworks to save the planet -- and in the process we will enjoy cleaner air and quieter neighborhoods without all those obnoxious, toxic, and tranquility-destroying fireworks explosions. Fireworks displays are simply a gross celebration of pollution. By banning fireworks, we can improve the health and well-being of ourselves, of our pets, and of our environment.

Even if we eventually discover that carbon dioxide does not cause Global Warming, we still have ample reason to impose a ban on fireworks, which pollute the environment in many ways, aside from Global Warming.

For more information about the pollution caused by fireworks, read the article entitled "Fireworks - Cheap Thrills with Toxic Consequences" at this website