Russia and the United States will begin their talks about the new Strategic Arms Reduction Treaty (START) on April 24. Russia has many questions to ask the United States about the execution of the previous treaty, which expires on December 5, 2009. The USA’s violations touched upon the missiles used by submarines, warplanes and ground-based missiles. America can use weak points of the treaty to double the power of its nuclear arms. 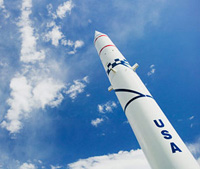 The US-Russian talks about the new treaty are to begin in Rome on April 24. The talks will follow the adequate agreement achieved by US and Russian presidents at their recent meeting in London.

START-1 was signed in Moscow on July 31, 1991 and came into force on December 5, 1994 after the break-up of the USSR. In accordance with the document, the Soviet Union (Russia since 1992) and the United States were supposed to cut their nuclear arsenals to 6,000 nukes within seven years. The USSR was allowed to have 6,500 nukes, whereas the USA could enjoy having 8,500.

The document banned the production, testing and the deployment of air-launched ballistic missiles, underwater launch systems for ballistic and cruise missiles, as well as orbital missiles. Russia and the USA said on December 6, 2001 that they had executed their obligations of the START-1 Treaty. However, experts said that Russia had 1,136 carriers and 5,518 nukes, whereas the United States had 1,237 and 5,948 respectively.

The Russian administration – the Foreign Affairs Ministry and the Defense Ministry – made a number of complaints about the US-led execution of the document.

Article 3 of the Treaty regulates the following: the number of nuclear warheads on every intercontinental ballistic missile or submarine-based ballistic missile must not be larger than eight. When the USA tested their Trident-1 and Trident-2 subs after the treaty had come into force, they used a larger quantity of missiles. Ten warheads give the United States an opportunity to mount the additional 288 nukes on 144 missiles.

Russian specialists were not allowed to conduct long-term inspections of US submarines over ‘technical difficulties.’ The Russians can not find out the number of nukes deployed on Trident-2 subs.

America also has a right to continue its cooperation with Britain as far as submarines are concerned. The USA can sell Trident-2 defense systems to Britain, although it is not known which country conducts the subsequent tests of the missiles – either the USA or Great Britain.

The submarines, which the United States tests of its range grounds, supposedly belong to Britain. The US administration does not consider it necessary to report anything about those tests.

When the START-1 Treaty was being prepared, US officials said they were not going to redesign their B-1 bombers to long-range air-based nuclear cruise missiles. As a matter of fact, they simply kept an opportunity to mount near a thousand warheads on the bombers easily.

It goes without saying that the new treaty to regulate the offensive arms is a matter of global importance. However, Russia should be extremely careful with everything that the USA will have to offer at this point.