Washington decided to get to the bottom of the countries which create problems for the United States. They prepared a draft law to strengthen the sanctions against Iran, North Korea and Syria. President Obama released quite harsh statements against Iran, but the USA has not been able to frighten the Islamic Republic yet. 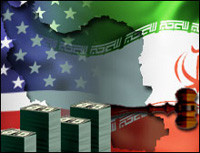 The position of the new US administration regarding the issues of the axis of evil does not differ much from that of the previous administration. Obama said that he would be ready to resume dialogue with Iran in case Teheran scraps the national nuclear program, refuses to support Hamas and Hezbollah groups and stops making threats to Israel.

Obama said that he wanted bigger carrots and bigger sticks not to let Iran build a nuclear weapon. The United States will therefore use tougher sanctions against the nation to change Iran’s behavior, he added.

US Secretary of State Hillary Clinton made anti-Iranian statements already during her presidential campaign. “And I want the Iranians to know that if I am the president, we will attack Iran. And I want them to understand that. Because it does mean that they have to look very carefully at their society. Because whatever stage of development they might be in their nuclear weapons program, in the next 10 years during which they might foolishly consider launching an attack on Israel, we would be able to totally obliterate them. That's a terrible thing to say, but those people who run Iran need to understand that,” she promised.

A reaction from Teheran followed immediately. An official spokesman for Iran’s Foreign Affairs Ministry, Hasan Qashqavi, said that there was no sense in using the carrots and sticks language against Iran. “Mr. Obama must know that such methods will not work with us,” Qashqavi said.

US politicians target their efforts at the coming presidential elections in Iran (slated to take place this summer). Washington will try to topple the ultraconservative forces in the nation. USA’s further policy towards Iran will depend on the election results.

The House of Representatives of the US Congress currently considers a bill about the strengthening of sanctions against Iran, North Korea and Syria. The bill stipulates restricted nuclear cooperation between the USA and Russia in case the Russian Federation contributes to the development of the nuclear programs of those countries or supplies enhanced conventional weapons or missiles to those countries.

The draft law virtually unites all US sanctions against Iran, North Korea and Syria. The United States seeks to strengthen the sanctions against those who render assistance to the three countries in violation of the non-proliferation regime.

The document also includes a section which empowers the US secretary of state and the homeland security secretary of the USA to deny US visas to senior officials of foreign governments, as well as directors and shareholders of foreign companies and firms which conduct the prohibited cooperation with the three countries.

The USA obviously tries to support moderate politicians in Iran. Aggressive statements are only the visible part of the relations between the two countries.