Gas slowly turns into liquid gold in many US states

In the USA high prices have turned car gas into “liquid gold.” Gas has also become a major attraction for thieves against such a background. They steal petrol not only at gas stations, but also from gas tanks of private cars, buses and trucks. 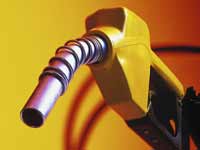 Gas slowly turns into liquid gold in many US states

In most of such cases, swindlers drill holes in gas tanks to obtain the necessary quantity of fuel.

“It’s a new trend; I’ve never heard of such things until gas prices soared up,” said Dale Fortin, the owner of a car repair garage in Denver.

Bruce Burnham, the owner of a truck park in Louisiana, stated that more than 20 of his clients had fallen victims to “gas thieves.”

Such incidents began to appear after Hurricane Katrina in 2005, when gas prices started growing in the USA. Afterwards, the prices dropped a while, although their growth resumed again soon. Law-enforcement agencies and insurance firms ring the alarm: covetous criminals disregard public and their own security. A spark may cause ignition or even an explosion when perpetrators use an electric drill in an attempt to steal gas.

“They use wireless electric drills to make holes in gas tanks. Heating and frictional energy may set off ignition. It is highly hazardous for criminals and other people,” stated John White, a policeman in Denver.

According to law-enforcement agencies, owners of pick-up trucks and sports vehicles fall victims to such crimes in most of cases.

All modern cars in the USA are outfitted with plastic tanks. They are much safer for drilling. The current retail price of the lowest-quality gas has exceeded the level of $3.9 per gallon (1 gallon=3.78 liters), the American Automobile Association (AAA) said. The cost to replace the damaged gas tank may reach $500.

The growing gas prices affect not only car owners, but also police officers. In a great number of US cities and towns policemen use bicycles instead of cars. Like any other organization police stations approve a yearly budget that includes gas costs. “Last year our gas cost was 2.4 dollars per gallon,” Robert Cox, Police Chief of Clive, Iowa, told ITAR-TASS. “Annually we need about 17,000 gallons of gas,” he added.

However, now petrol prices have grown up to almost $4. “It aggravates the situation as our organization is funded by the city and the state,” Cox said.

Thus, it was decided to resort to bicycles that patrol policemen used only occasionally.

However, from a certain point of view bicycles are even better than cars, for they can go along narrow passages. Naturally, they cannot chase criminals who flee by cars but in the countryside bicycles are much more convenient than bulky cars. The most obvious disadvantage of bicycles is the lack of comfort in bad weather.