The resort city of Sochi bidding to host Winter Olympics 2014 will become the sports capital of Russia not depending on the resulting of the voting. This opinion was expressed by Vladimir Potanin, the President of Interros holding, which builds the Rosa Khutor resort in Sochi – the major object of possible Olympics. “I am not sure if Sochi manages to host the Olympics 2014, but it will become the sports capital of Russia for sure,” Izvestia quoted Potanin as saying. 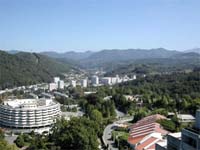 President Putin released a similar statement last year: “We will support Sochi’s bid regardless of the result, because the country needs a modern and comfortable sports and resort center,” Putin said.

The International Olympic Committee will announce the hosting city for the Winter Olympics 2014 on July 4. The legendary Russian resort competes with Saltsburg (Austria) and Pyeong Chang (South Korea). Even if Sochi loses the bid, the Federal Target Program for the development of the city will not be suspended.

Russia’s Minister for Economic Development and Trade, German Gref, stated at a regular meeting of the Coordinating Board for the Implementation of the Federal Program “The Development of Sochi as a Mountain Resort City” that works on all objects should be completed a year before the Olympics start. All the objects need to be tested before the Games.

The minister believes that it is quite possible to execute the plan. About 170 tasks of the above-mentioned program will be finished during the current year only. Designers, engineers and workers will complete 13 Olympic objects and 23 objects of infrastructure.

It is worthy of note that private business actively participates in the federal program too, the Izvestia newspaper says. As soon as the program and private investment projects are completed, Sochi will become a city concentrating training bases for almost all kinds of sport all the year round.