Sir Elton John and David Furnish's marriage has become the biggest and the most popular gay wedding in the world. John, 58, and Furnish, 43, were among hundreds of same-sex couples marrying in England and Wales on Wednesday, the first day such ceremonies were possible. Others wed earlier this week in Northern Ireland and Scotland.

Prime Minister Tony Blair, speaking to reporters at a news conference, congratulated the couple for exercising their newfound legal right. Activists saw the union as a watershed moment for gay rights. 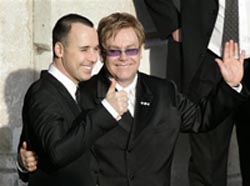 On the eve of the ceremony, the couple had its pre-wedding bash in London's Too2Much. Russia's Moskovsky Komsomolets newspaper called the night club to learn more details about the party. A young man who named himself Gabriel answered the questions of the Russian newspaper by phone.

Too2Much is a vanguard cabaret. Until recently, gay couples organized their unofficial wedding ceremonies in this or other clubs just for the sake of their own entertainment. Elton John's was the first legal wedding ceremony we have had here. Their pre-wedding bash was very much like that of other couples by the way.

Was the pre-wedding bash a success?

That was a rather free party. Our club is popular not only among same-sex couples and sexual minorities. Too2Much is a fashionable cabaret with classical interior and irregular decorations. Some people sometimes compare the club to the circus. We often organize such parties after we completed restoration of the club.

Did Sir Elton John make any special requests as concerning drinks and meals for the party?

Sir Elton John and David Furnish approved of the menu the club offered. We usually offer the best and the most luxurious things to our clients.

Did they request tougher security measures?

No, everything was quiet during the party. It was no need to have more security.

Was the party expensive?

I cannot say exactly how much the couple paid for the party. I know that not everyone can afford such a party. It general, parties in our club are rather expensive.

The Moskovsky Komsomolets newspaper learnt that about 180 guests were invited to the party, Brian Adams, Ozzy Osbourne with wife, Scissor Sisters and Take That, Liz Hurley and Elizabeth Tailor among them. Waiters with naked trunks wearing ties and boots served guests withchampagne.

Madonna appeared to be one of the most wanted guests at the wedding party, but after she refused to attend John's pre-wedding bash on Monday night, he called her a "miserable cow".

As The Mirror reports, Elton said: "Madonna, the miserable cow, wouldn't do it. David asked her three times."

The newly-weds asked their guests to make donations to help AIDS patients and expected no other wedding presents. But some guests still brought presents. One of the singers invited to the ceremony told journalists she would present the couple with the most vulgar toaster she could find.

Next day after the party, Sir Elton John and David Furnish went to Guildhall in Windsor, the chapel where Prince Charles and Camilla Parker Bowles registered their marriage not long ago, also to make their union legal. It was planned the wedding ceremony would be quiet and private. Only Elton's mother and stepfather Sheila and Fred Fairbrother, David's parents Jack and Gladys were invited to it. But still Elton John's wedding became a real attraction for his fans, other same-sex couples and other curious people. The police even had to make barriers to keep the crowd back. After the ceremony, the newly-weds and their guests went to Elton's estate in Windsor where they had a party in two huge marquees. It is said the couple spent about one million of pounds (about 1.5 million euro) to organize the wedding. Over 700 guests – the greatest number of stars ever assembled in one marquee – were invited to the banquet, George Michael (who may also soon register an official marriage with his boyfriend) and Victoria Beckham among them.

Here are some curious facts about Sir Elton John and David Furnish.

Elton John's real name is Reginald Kenneth Dwight. He assumed the stage name after saxophonist Elton Din and blues musician Long John Baldry. He started playing the piano at the age of four. It was for the first time in 1976 that Sit Elton John announced publicly in an interview to a music magazine he was a bisexual. In 1984, Elton John married Renate Blauel but divorced her in four years. He has been living together with boyfriend David Furnish since the early 1990s. They first met at a Halloween party in 1993. They have been together since that despite of the 15-year age difference. The friendship turned out to be really beneficial for David: he gave up drinking alcohol and taking drugs. It also gave a new spur to his creative activity. David Furnish shot a documentary about Elton John: Tantrums & Tiaras in 1997. Sir Elton John and David Furnish are godfathers to children of David and Victoria Beckham. The children were also mentioned in Elton's will.