“Roman Abramovich is the most unusual character among your moneybags,” a London paparazzi said once. “He is so quiet, he does nothing that can be published by a tabloid. He does not throw a huge party for a thousand guests in some trendy restaurant, he does not spend a fortune on jewelry. All and all, he's a bore. Neither me nor my colleagues have ever caught him in the act of doing something scandalous,” added the paparazzi. 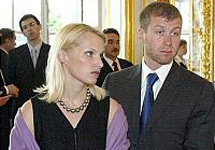 Indeed, Roman Abramovich has been living inconspicuously in London. Sometimes he can be seen in a box at Stamford Bridge stadium watching his FC Chelsea win another game. Russia's richest man publicly behaves like a model law-abiding citizen. By no means he wants to stand out though the press reports now and then on Mr. Abromovich's shopping activities e.g. the purchase of a luxurious yacht, a posh apartment or something similar that can defy imagination of the common people.

Roman Abramovich's wife Irina is even better at keeping a low profile than her husband, according to a book written by the Daily Express journalists Dominic Midgley and Chris Hutchince. Irina Abramovich can get the best variety of any thing she wants to have. She can live in the sumptuous houses, fly in the private jets, ride in the limos, and shop for anything she fances to wear, eat or drink. At the same time, she tends to stay away from the media and avoid publicity whenever it is possible. Money can buy you freedom, or so they say. It is because of money Mrs. Abramovich is living in a golden cage.

Her freedom of movement is constantly restricted due to a threat of attempt on her life or abduction. Irina and her five children have to be on the watch all the time. Numbers of their cell phones have to be continually changed so that the movements of Mrs. Abramovich and her children can not be detected by satellites. A team of security experts from a private security agency Kroll Associates is watching over Irina. The agency is staffed with former members of the British intelligence and security services.

From the authors' point of view, Irina and her family seem to be more secure in London as opposed to Moscow, the place where many people envy them their wealth and success. However, only in Moscow the Abramoviches can be whisked off in a stretch limo under escort of armed guards in the jet black SUV's with sirens wailing. In London, on the other hand, even billionaires at times get stuck in a traffic jam. A bomb hidden in a car parked nearby can be detonated while a motorcade drives by. Boris Berezovsky survived a similar attempt on his life in 1994.

Incidentally, Irina and Roman almost never share a vehicle due to the fear of attempt on their lives. Apparently, they do not want their offspring to turn into the complete orphans one of these days.

According to Irina's former colleague, Larisa Kurbatova, who also used to be a flight attendant at Airflot, the state-controlled Soviet airline, Irina has always tried to look good. Mrs. Kurbatova told the authors of the book that she had been quite impressed when she had seen Irina Malandina (Irina's maiden name) for the first time. Irina was filling an application for the position of a flight attendant.“She was thin and slender, and her face looked pale. But she was a beauty anyway. She had big blue eyes, a fine nose and sensual lips. Her legs were unshapely, though,” Mr. Kurbatova is quoted as saying in the book. Nowadays Irina, a mother of five, still has a great shape.

Irina's mother and father waited on tables in a restaurant. He father died in an accident when she was 2 years old. Her mother could barely make both ends meet. She had to work extra shifts making just 120 rubles a month. Irina was a shy and secretive child yet her shyness concealed an iron will. She got a job at Aeroflot through her aunt who was a flight attendant.

Irina followed a piece of advice from her workmate to spend more time with passengers who traveled first class. She began collecting the passengers' business cards. One of the cards in her collection bore the name of Roman Abramovich. Mrs. Kurbatova claims Irina “was not overexcited when she met him, but a few months later she announced that they were going to get married.”

These days the former flight attendant can buy anything she wants. A former business partner of her husband says Irina became addicted to shopping. She was frequently seen shopping at Sloane Street boutiques, buying clothes, shoes and stuff from Armani, Gucci, and Prada.

Irina is especially fond of shopping at Harrods, London's fancy department store. She became a friend to the store's owner, the Egyptian billionaire Mohammad Al Fayed whose son got killed in a car crash along with Princess Diana in 1997.

After shopping she normally goes to one of their numerous houses. The Abramoviches have a London apartment worth 5 million pounds, they also own a 425-acre estate in West Sussex.

Besides, the Abramoviches have a villa in the fashionable resort of Saint Tropez, in the French Riviera. Sure thing, the governor of Chukotka has one more residencein Anadyr, the capital of Chukotka. It is a wooden house. Yet the governor's wife is not so keen on visiting the log cabin in that snow-clad region of Russia.

Speaking of property, we should not pass over the aircraft and yachts owned by the Abramoviches. Last year Roman bought the Boeing 767 for 56 million pounds, an add-on to his Boeing BBJ which cost the baby-faced oligarch 40 million pounds back in 2000.

The new Boeing's passenger cabin is outfitted with red and chestnut wood, and decorated with gold. The former flight attendant bought the tableware for her aircraft in Thomas Goode, one of the most famous British outlets selling china.

The authors of the book believe that shopping is not the only thing Irina is concerned about. She has a good command of English; sometimes she had to play the role of a family diplomat smoothing over the disputes between her husband and owners of other football clubs.

First and foremost, Irina is a devoted mother of her five children: 12-year-old Anna, 11-year-old Arkady, 10-year-old Sonya, 4-year-old Arina, and Ilya who is 2 years old. Irina studied art in the Moscow State University in order to give her children good education. She often takes her kids to the museums and picture galleries.