Too many cooks spoil the broth

Officials of the Russian aviation industry and many directors of Russian airlines have been proud with the unexampled 20 and 30-percent increase in air transportation in the country. The situation has changed for the worse recently, though. The air traffic in Russia has decreased considerably during the recent several years: spokespeople for 19 of 35 Russian airlines said that they had been suffering losses because of the declining air traffic. 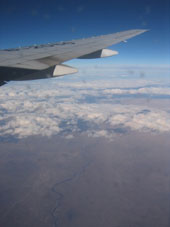 The Russian market of aviation is experiencing a serious crisis nowadays. Valery Okulov, the Director of Russia's largest airline, Aeroflot, stated during the recent conference devoted to current problems of the home aviation industry that the market was declining because of the ongoing growth of prices on aviation fuel (they increased by 60 percent vs. 2004). The rising prices on fuel automatically result in expensive tickets for passengers. The average price of a plane ticket in Russia makes up more than $200 (almost 6,000 rubles, economic class), which is more expensive than in European states, for example, in spite of the fact that the Europeans enjoy a higher level of income.

According to Aeroflot's director, this is the evident problem of the current crisis in the Russian aviation industry. Valery Okulov believes that Russia needs to develop centralized headquarters for the aviation industry and finally systematize numerous reforms, which would not come to an end.

Indeed, there is a whole variety of governmental departments that deal with the problems of the Russian aviation industry nowadays: some are responsible for airports, others take care of the air traffic, someone else controls international flights, and so on and so forth. Everybody's business is nobody's business, so to speak.

Andrey Martirosov, the director of another Russian airline, supported Mr. Okulov's opinion at this point.  Martirosov criticized the Russian government for its inability to determine priorities in the field of air transportation. The changes that are vital for everyone – for the industry as it is, for passengers and for the national economy on the whole – are being conducted too slowly.

The role of state structures in the aviation industry has been quite dubious since the collapse of the Soviet Union in 1991. On the one hand, officials have been trying to promote the concept of air transportation for the Russian population. On the other hand, they set extremely high tax rates for the industry, which made a common plane ticket become a luxury item for a common Russian citizen. Authorities intensified competition between the airlines, but granted some preferences to certain airlines, etc. The Russian market of aviation obviously needs structure, otherwise the demise of the domestic civil aviation is inevitable. The air traffic may continue declining, which will subsequently result in numerous bankruptcies of Russian airlines and the arrival of their foreign competitors.

Is it possible for Russia to improve the situation under current circumstances, which particularly include high fuel prices, outdated airplanes, the absence of state of the art market technologies and administrative chaos? Specialists say that it is quite possible, no matter how difficult it could seem. Aeroflot's director is certain that the abolishment of burdensome taxes and duties could result in a dramatic turn for the better. Such a step could make Russian airlines competitive, give them an opportunity to enter the international market and establish steady positions on the home market. Secondly, specialists believe, the Russian government should regulate the prices on aviation fuel: if the government and nation's largest oil companies ventured to freeze the cost of petrol prices in Russia, why not doing the same with aviation kerosene?

Finally, the government of Russia needs to take urgent measures to systematize the administration of the aviation industry, establish normal relations between aircraft manufacturers and operators, etc.

All of the above-mentioned offers are quite feasible, the government only needs to look into the matter in detail and approve several documents.