Bogs can hide more than one monster inside its limitless vastness

Naked dead bodies are found every year in the dense forests north of Saint Petersburg. The bodies have no evidence of violent death. The police are in confusion. Some blame evil spirits. 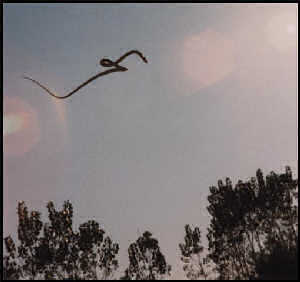 A small piece of land on the Vepskaya Heights has claimed 16 people who died in mysterious circumstances since 1993. But the casualty list is reportedly longer because some bodies have never been retrieved.

Let us assume that somebody has been killing people for years now. But why does a perpetrator (several perpetrators) disrobe the victims without taking any valuables? A serial killer does not fit in either. It is hard to imagine a mentally violent person lying in wait for locals (most of them are in their advanced age). An explanation should be found for the very long breaks between the attacks. You can only run into a person in a place like that because it is a forest, it is not an amusement park.

Anatoly Boitsev, a local police chief, suggested that we talk to local residents. We followed his advice. We visited local schools, markets, stores, and three villages. The locals stick to the only version of the events. The version looks absolutely incredible. So better skip it for awhile.

We brought our findings back to Moscow and showed them to Sergei Nikitin, senior expert at the Moscow Bureau of Forensic Evaluation. We pointed out to the following:

- people are killed in the period from April to October;
- no evidence of violent death ever found;
- victims apparently go insane prior to being killed, at least their behavior is irrational e.g. they strip themselves to the bone, eat dirt, throw away mushrooms and berries they have picked in the forest, and place their clothes into the empty bags and baskets.

“Mr. Nikitin, can you somehow explain the mystery?”

“I'll give it a try. I have to tell you beforehand that I don't believe in mysticism. I do believe that any crime can be solved provided that there is a will and appropriate equipment.

“First, it looks like a seasonal thing if we assume that there is a link between all sixteen deaths. All the tragedies took place at warm outdoors temperatures. However, it does not oppose the possibility of dying from hypothermia. A patient usually dies when his body temperature drops below 20 degrees. Sometimes the homeless freeze to death in the summertime in the center of Moscow.

“Second, why all of them took off their clothes? Looks like they were suffering from heat in the beginning. The blood vessels on their skin may have been hit by a spasm as cold air blew over the warm body. The spasm affects the blood flow and disrupts the heat transfer. As a result, the skin grows very cold while internal organs overheat and become larger. A person who has fever will die from temperature shock faster than another person who is healthy. Yet again, it doesnot opposethecauseof death handed down to all the victims: hypothermia.

“Finally, madness before biting the dust. Very high body temperatures can cause insane actions. On the other hand, people may have eaten or drunk some stuff that induces fever and hallucinations.

“On the basis of available data, I conclude that some toxic substance got into the human body. The substance is capable of inducing a surge in body temperature and cause mental confusion. Given the seasonal character of the events, I would suppose that all the victims either had a fateful meeting with some animal or took the wrong stuff in the mouth i.e. a poisonous flower or mushroom.

However, no traces of toxic substance have been found by forensic examination.

“They probably had no idea what they were supposed to look for. Please do not get me wrong. Not every single lab of forensic medicine in this country has state-of-the-art equipment.”

There is one more version that (ostensibly) stands to reason. A snake bite. According to specialists, there is only one poisonous snake populating the northern part of St.Petersburg region. It is an ordinary viper. But a person does not feel any fever when bitten by a viper. There are other snakes and lizards in the area yet all of them are harmless e.g. grass snakes and slow worms. Meanwhile, locals believe the snake list is incomplete.

“In the 1980s we got the first reports about some flying snakes living in our bog,” says former section head of the natural reserve Vepsky Les (Vepsky forest) Alla Titova. “The snake's bite was reportedly lethal,” says she. “According to locals, 'the flying monster' is thought to be a dangerous but an ordinary animal. Locals speak about their encounters with it the way they would tell you stories featuring a bear or a wood grouse.

Amateur zoologists from the research society Labirint do not doubt the existence of the mystical flying monsters. Zoologists have conducted a total opinion poll in the villages of the region for several years in a row.

“Those snakes look picturesque,” says Ilya Agapov, a member of a geographical society and a Labirint activist. “Male species have the fleshy growth on their heads, it resembles a rooster's comb. Their behavior is pretty unusual, eyewitness reports say they can leap around for a few meters. The snakes can reportedly take long leaps from the trees which they actively use, that is why they were dubbed the “flying monsters,” says Mr. Agapov.

There is nothing unusual in the existence of such species. Bogs can hide more than one monster inside its limitless vastness. Besides, there is an ecological analogue of the Russian “flying monster.” It is a palm snake living Indonesia. The creature can leap by gliding through the air while flattening its belly and expanding its ribs.