“I wish the world could be free of pain and suffering” 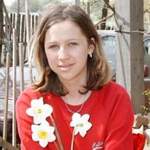 Nobody doubted that Nastya Gontarovskaya had a brilliant future lying ahead. She was pretty and smart. When she was 15, she earned her complete degree DELF of the French Ministry of Education. She was an enthusiastic tennis player too. Well, the story starts in a tennis court. One day Nastya fell on her backside during a training session. The bruise did not heal for a long time.

Eventually, Nastya was diagnosed with sarcoma of the soft tissues. Following a complex operation she was bedridden for three months. Not to mention excruciating pain day and night. Then a new tumor grew in the wound and burst the stitches open. The pain became almost unbearable, metastases spread up to the lungs. Doctors said there was nothing they could do. Nastya was doomed.

Her mother tried to challenge the inevitable. She got in touch with professor Tarasov, a renowned surgeon. The girl was operated in Tarasov's hospital in St. Petersburg, the operation lasted for 11 hours. When the operation was over, Nastya's mother overheard the doctors talking: “Tomorrow it would be too late…”

Nastya had to undergo ten chemotherapies and twenty five sessions of radiotherapy. She weighed 35 kilograms in her 16 years and a half. She looked more dead than alive. Everybody was expecting the worst. 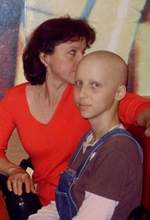 “I want nobody to suffer the way I did,” said Nastya to her mother one day. “Let the pain be gone for all the people if I should die. This is my last wish and I hope Lord will make it happen,” said the girl.

Then some kind of miracle took place. The disease retreated for a while. But it did not go away forever. It was a remission, or reduction of the size of a cancer and symptoms it is causing. But the deadly disease can strike at any moment because the tumor was not removed completely. The tumor got too much intertwined with a trifacial nerve which is located in the vicinity of the spinal column. The doctors admit that they have no equipment for removing the remaining pieces of the tumor. The girl should be admitted to an Israeli clinic that has state-of-the-art equipment required for the operation. The girl's family already sent a request to the clinic and received a positive reply.