Many people from the Russian town of Penza became witnesses of a breathtaking scene. A man stretched his arms out of the window of a high-storied building holding two babies in his arms. Puffs of smoke were belching from the window. 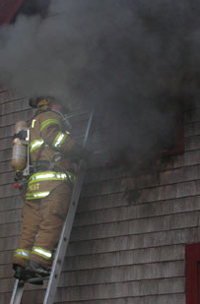 People living in the apartment block panicked when they saw puffs of smoke coming out from the flat where a family with two babies lived.

Young father, Iliya Andiyarov, was at home that day together with his father and two babies. His wife who was pregnant with their third baby was out at work. The father fed his babies, put them to bed and went to sleep himself. The grandfather, who was staying in another room, also was going to have some sleep, but decided to smoke a cigarette before.

When Ilya woke up, his flat was on fire. He grabbed his two little babies and rushed to the door, but the fire prevented him from running out of the flat . Then Ilya did the only possible thing that saved his babies’ lives. He broke a window and stretched his arms outside holding the children in both hands.

The people outside the building tried to help the desperate father. Someone rushed to the flat’s door to wrench out the lock, but to no avail. Several people called the ambulance and fire-brigades at the same time.

The father was doing his best not to lose consciousness. Firemen had to break the window on the lower floor to save the children. The father used fire-escape to leave the flat. The grandfather was saved by firemen. He was poisoned by carbon monoxide.

Ilya calmed down a bit only when the doctors told him that his children’s lives were out of danger. The children were sent to a hospital for a few days.

It is worthy of note that the father who was risking his life to safe the children will have to face serious problems soon: the fire destroyed all family possessions and made the flat unsuitable for living. Russian laws and authorities could hardly help the family – homeless fire victims receive 1,000 rubles ($45) per person a month as compensation.