The palace employees cleaned every corner in and out of the palace, although it used to be a dilapidated building just several years ago

Did schoolboy Vladimir Putin think 40 years ago that one of the most beautiful palaces in St.Petersburg will be restored especially for him and his guests? Obviously no. Nowadays, there is a whole crowd of people waiting for a chance to take a glance at the beautiful residence of the Russian president. Vladimir Putin uses the residence for official meetings with the leaders of the Commonwealth of Independent States. The Russian president is currently expecting another guest of honor in his residence – German Chancellor Gerhard Schroeder. 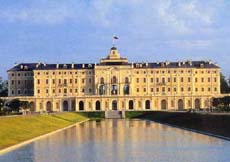 The sign on the doors of the palace says now that the palace will be closed for visits on October 5-7. The palace was closed due to Vladimir Putin's birthday, which the president celebrates today, on October 7.

It is worthy of note that Putin always tries to celebrate his birthday in his native city, St.Petersburg. In 2003, for example, the president went on board a tour boat to take a ride in a company of his friends along the Neva River in St.Petersburg.

The people working in the palace obviously decided to clean the presidential residence to the utmost. Janitors were cleaning the pond and the streets near the palace of autumn leaves, trying to sweep away every little speck and grain out from the gaps between the stones on the pavement. Washerwomen were trying to make garbage cans look immaculate: they were cleaning the cans with soap.

A common person is not allowed to enter the territory of the state complex entitled the Congress Palace to enjoy the view of the Konstantinovsky Palace (the presidential residence) and the gorgeous garden around it. One should collect a group of 15 tourists to have an opportunity to see the complex. The entrance to the complex reminds the inspection process in an international airport: people have to go through metal detectors and have their bags and purses X-rayed. Security guards meticulously count all the visitors: the number of visitors entering the complex must coincide with the number of people leaving the territory.

The fence around the park is outfitted with numerous surveillance cameras; people are allowed to walk along pedestrian paths only – all other paths are blocked. “Visitors in a state of alcoholic intoxication and those having bulky bags or poisonous, dirty or fetid things or substances are not allowed to enter the territory of the complex,” security rules run. The rules also forbid everyone to dance, sing and play musical instruments. 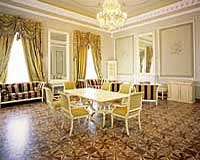 The Konstantinovsky Palace was recreated for the EU-Russia summit in May of 2003. The dilapidated country estate was turned into a gorgeous residence within 18 months: the restoration project required an investment of $280 million. The palace was equipped with quite a number of comfortable changes. The huge terrace with the view of the Gulf of Finland was outfitted with the heating system. There were two noiseless elevators installed in the complex, finished with birch-tree and five types of marble. Several halls of the palace were equipped with plasma screens for live TV conferences with any city of the world. To crown it all, the complex can boast of having several helipads.

The Russian president takes the western wing of the palace, whereas the right wing is meant for foreign delegations. It is not allowed to take pictures of Putin's waiting room – one should pass it by without a stop. Everything that one can see there is a large desk, a bookcase and a lot of yellow telephones. Needless to say that all the halls of the palace are gorgeously decorated: marble fireplaces, silk curtains, chandeliers of crystal, beautiful paintings from the Hermitage collection and fresh flowers everywhere. The Belvedere hall of the palace is designed like a captain cabin. The Russian president had a meeting with his American colleague, George W. Bush, in the hall in 2003: the two presidents were sitting there in gorgeous armchairs made of cherry-tree, warming up their feet on the woolen carpet from New Zealand.

When Putin visits the town 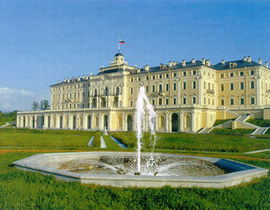 of Strelna (a suburban town of St.Petersburg, where the Konstantinovsky Palace is situated), the president stays in the so-called Consulate Village. There were 20 comfortable cottages built there on the threshold of the 2003 summit: every house has four or five rooms. Each cottage bears the name of a Russian city. They look very nice, but every cottage has a peculiar interior design. The Ekaterinburg cottage, for example, is adorned with malachite, although Putin always stays in the St.Petersburg cottage, which sits on the coast of the Gulf of Finland. “There are bullet-proof windows there, and extremely soft carpets. All the furniture is made of very expensive heavy wood, a local tour guide said.

It is noteworthy that one may rent the presidential cottage at the time when the complex does not hold any political events. One can relax in Putin's armchairs and even take a nap in his bed for $5,000 per night (the price is twice cheaper during the winter period).