Maria Sharapova unwilling to trade her Russian citizenship for anything

World's tennis player No. 1 answered questions at a press conference before the opening of the Kremlin Cup in Moscow

The Kremlin Cup international tennis tournament opened in Moscow yesterday. Maria Sharapova's arrival in Moscow has already become the central event of the entire tournament. Maria gave a press conference on the threshold of the event: the President of the Russian Tennis Federation, Shamil Tarpishchev, awarded world's tennis player No.1 with a badge of an honored master of sports and presented the Russian Cup prize to mark Sharapova's achievements of the best Russian tennis player during the recent 200 years. 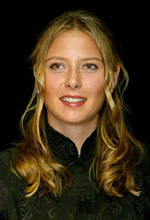 Do you see yourself as a Russian or an American citizen? Is it in your plans to change citizenship?

I consider myself a Russian, especially when I live abroad. I do not even think about changing my citizenship.

You will have to play some other Russian tennis players during the tournament. Do you have any preferences on whom would you like to play?

It makes no difference to me, whom to play. I can only say that it is hard to play them.

The surface is slow, although I have played on such a surface before this year. I will get used to it.

Which victory of yours do you see as the most important accomplishment that you made?

It is Wimbledon, of course. I love fast court.

Do you have any friends in the world of tennis?

Yes, it is Maria Kirilenko, first and foremost.

Your father always accompanies you when you travel for tournaments. Does your mother participate in your tennis career?

No, she does not. She deals with my studies and takes me to museums. Tennis is my father's prerogative only.

Did you follow the Russian tennis team in the Fed Cup?

Yes, the girls did very well. It is hard to win for the second time. Maybe, I will help them next year.

What other sports do you prefer?

Football and hockey. I am a fan of Madrid's Real. I have recently had a chance to meet Zidane.

Do you have any acquaintances with Russian hockey-players?

And what about Hollywood?

I am friends with Uma Thurman. She is a great woman.

What are you going to do after tennis? You have recently launched the production of your perfume…

I like fashion. I will probably go studying in this field. As for perfumes, I personally participated in the production process and blended scents. The perfume has just been released in the USA, but it will be out in Russia soon too.

Have you managed to see anything in Moscow yet or visit any events probably? 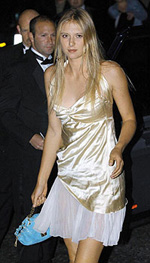 I do not attend any events. My goal is to win the Kremlin Cup. I have done a little shopping and bought some shoes. Moscow has very good stores; this is one of the most beautiful cities in the world really.

Are you going to buy an apartment in Moscow?

Yes, I am, but I am not telling you where. I hope that I will be visiting Moscow more often than I do now.

Yes, I own two cars, a BMW and a Rover SUV. I am a good driver; at least I have not been in a car accident yet.

Do you have a special talisman?

Not really, no, just my cell phone, probably, which I always carry with me.

Have you spoken to Boris Yeltsin?

Yes, but not a lot. His secretary approached me and said that Mr. Yeltsin would like to talk to me. We had a sweet short conversation.

What about Vladimir Putin? Did you congratulate the president on his birthday?

I would love to. I was glad when he called to congratulate me on my victory in Wimbledon and then on my birthday. I did not congratulate Mr. Putin on his birthday, but I will a little bit later.

Do you follow Russia's life while living in the USA? Do you like any new books or movies?

My father does. He likes Brat, the movie (translates into English as “Brother”) and its sequel, Brat-2. I listen to the Russian band called Umathurman. As for books, Maria Kirilenko has recently given me one, but I have not read it yet.

What is the most important thing for you in life?

Health. Everything else will come along.