Scarlett Johansson is voted by FHM readers as the world's sexiest woman by magazine readers The 21-year-old American actress unseated Angelina Jolie from the top spot in the “100 Sexiest Women in the World,” list. 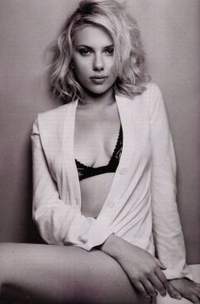 ”One of the best things for a woman to hear is that she's sexy. I'd like to thank FHM readers for the huge compliment” - says Johansson about her success.

Among those who managed to get into the top 10 besides Johansson and Jolie were big names like Jessica Alba, Jessica Simpson, Keira Knightley, Halle Berry, Jenny McCarthy, Maria Sharapova, Carmen Electra and Teri Hatcher. FHM's U.S. Editor in Chief Scott Gramling said that Scarlett's overall personality had wowed the readers, “It's remarkable how Scarlett Johansson has caught the attention of our readers. Her sultry voice and striking beauty certainly have a lot to do with that, but so does the confidence she exudes. She seems to be one of those women who would be equally at ease on the red carpet as she would just hanging out with the guys," he said, according to whatistheword.com

The full list of the “100 Sexiest Women in the World” will appear in the May issue of FHM. Here is the top 10 list:

"It's remarkable how Scarlett Johansson has caught the attention of our readers," said Scott Gramling, the magazine's U.S. editor in chief, in a statement. "Her sultry voice and striking beauty certainly have a lot to do with that, but so does the confidence she exudes.She seems to be one of those women who would be equally at ease on the red carpet as she would just hanging out with the guys."

Johansson was born in New York City. Johansson's maternal ancestors originally came from Poland. She graduated from The Professional Children's School in Manhattan in 2002.

Johansson's roles include Grace MacLean in The Horse Whisperer (which was credited as her film debut), Rebecca in Ghost World, Charlotte in Lost in Translation, Griet in Girl with a Pearl Earring, Francesca in The Perfect Scoe and Nola in Match Point. All of these performances garnered positive critical notice. She was nominated for two best actress awards at the Golden Globes in 2003, one for drama (Girl with a Pearl Earring) and one for comedy (Lost in Translation).

Scarlett was invited to join the Academy of Motion Picture Arts and Sciences in June 2004.

Johansson was attached for a short time to the upcoming film Mission: Impossible III but did not join the cast, officially because of scheduling conflicts, although a falling out with Tom Cruise has been both widely reported and officially denied. She was replaced by Keri Russell. She was cast as Rebecca in ensemble independent film Thumbsucker, but dropped out before filming. She was replaced by Kelli Garner.

Johansson was featured in an advertisement campaign for the Calvin Klein perfume "Moment". She has also modeled for the French luxury brand Louis Vuitton and in January 2006 was signed to L'Oreal. Johansson was featured nude on the cover of the February 2006 issue of Vanity Fair magazine, with Keira Knightley.

As her personal life concerns she has claimed on several occasions to be addicted to cheese, saying "My greatest vice is cheese. Nothing else reigns over my life" - according to The Observer Magazine December 28, 2003.

Johansson has revealed that she has no problem with her male co-stars seeing her breasts, as she considers them to be her favourite feature. "I'm proud of my girls. They're my charms, my feminine wiles," she said in a January 2005 interview for Harper's Bazaar.

She strongly dislikes when journalists ask about her religion; hence, it's not clear. In Marie Claire she was asked "Are you religious?" Scarlett answered "That's a very personal question. I would rather not answer." Another occurrence witness is this quote: "She is really not enjoying this line of questioning. I need to shut it down before I ruin the shidduch.” However, she has been quoted as saying that she dislikes it when celebrities thank God or Jesus in their award acceptance speeches and is quoted as saying that her parents are atheists.