World-known photographer Annie Leibovitz has taken fabulous nude shots of Scarlett Johansson and Keira Knightley for the cover of the annual Hollywood edition of Vanity Fair magazine. The new issue of the magazine will hit the stores on February 14th. Tom Ford, the art director of the magazine, joined the beautiful actresses for the photo shoot. Mr. Ford did not have to take anything off, though: the man was pictured wearing a suit with no tie. 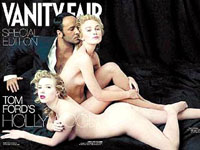 All photographs of the nude celebrities, which the photographer made, have been published in a special edition of the magazine - Extra. The magazine wrote that Johansson and Knightley were somewhat confused to take part in the photo session. Keira Knightley said that she was shy about every person entering the room when she was being photographed.

As for Tom Ford, he was not going to appear on the cover of the magazine at all. The editors originally were going to publish nude pictures of three beautiful girls. Rachel McAdams was supposed to be the third in the group, but she changed her mind shortly before the photo shoot. Johansson and Knightley were about to follow their colleague's example, when Tom Ford told the girls that they would be overwhelmed to look at those pictures when they turn 70. The two girls finally agreed.

Angelina Jolie posed nude in the water: the stunning photograph of the world-famous actress has been published inside the magazine.

Annie Leibovitz is known for her peculiar style in the art of photography. Her works graced the covers of such respectable magazines as Vogue, Vanity Fair, New Yorker and Rolling Stone. Leibovitz used to take nude shots of John Lennon and Bett Midler, Whoopi Goldberg, Demi Moore and Sting.

Semi-naked Arnold Schwarzenegger used to pose for Leibovitz sitting high on a white horse. David Beckham unveiled the secret of his tattoos for the photographer too. Well-known musicians and writers, athletes and artists were striking poses in front of the photographer's camera.

Annie Leibovitz's photo-album titled Women is still considered a bestselling book in the USA although it was originally published more than six years ago. Leibovitz can be described as one of the most famous and successful female photographers of modern times.

Born in Westport, Connecticut, Leibovitz received a bachelor of fine arts degree from the San Francisco Art Institute in 1971. She subsequently continued her studies with photographer Ralph Gibson. In 1969 she lived on a kibbutz in Israel and participated in an archaeological dig at the site of King Solomon's temple. From 1970 to 1983 she was a freelance photographer and the chief photographer for Rolling Stone magazine, and in 1975 she served as a concert-tour photographer for The Rolling Stones band. She has been a contributing photographer for Vanity Fair magazine since 1983, and in the early 1990s she founded the Annie Leibovitz Studio in New York City.