The extreme holiday of Russian tourists in Turkey

Our holiday was spoiled at once after the arrival

PRAVDA.Ru has already reported about resort hotels before. This year we decided to pay more attention to this issue. Our correspondents will write more about advantages and disadvantages of various hotels, offered for tourists both in Russia and in other countries. The peculiar feature of this project is that all materials will be published in three languages: Russian, English and Portuguese. We also expect official replies from administrations of hotels and tour agencies, if our estimations contain negative opinions. 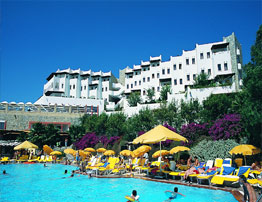 We start with Tropicano Bodrum Club in Turkey. The trip was recommended and organized by TEZ TOUR company.

When we arrived at the hotel, we were expecting instructions from TEZ TOUR representative Eugene how to live in the hotel. However, there were no instructions given at all. During the first meeting the guide was doing his best to sell excursion tickets and refused to talk about the hotel. Our first impression was formed immediately after the arrival. Despite the ragged walls of the front entrance, the map of the hotel promised an extended program.

The hotel's territory was very good indeed. It was flooded in green vegetation. For young tourists there were small benches hidden in bushes and flowers. The Aegean Sea, on the coast of which Tropicano Bodrum Club is situated, can be considered one of the purest seas in the world. That was all with the advantages of the hotel.

Tropicano Bodrum Club is officially a 4-stars hotel. However, I believe that it deserves not more than '2+.' This is the category that PRAVDA.Ru gives to the hotel judging by the general estimation of services, the comfort of the beach, the friendliness of the personnel and the absences of previously-offered services.

We went to Tropicano Bodrum Club as a family: two adults and one child under seven years old. At the tour agency we talked about a room with a balcony, but it did not become true. Moreover, we were housed in a room with worn-out furniture. The room was situated very close to a loud-speaker, from which we had to listen to old songs from early morning till late at night. A reception girl named Elena Dogan responded in the following way to our request to change the room: “Your child should know that life depends on fortuity.” The six-year-old boy listened to our dialogue with the lady. He concluded that Russian women in Turkey are very angry.

The TEZ TOUR guide attempted to improve the situation a bit later. He asked for a ten-dollars 'bribe' and promised a quick change. However, the guide failed to accomplish anything. He said that a spokesman for the hotel took the money, but refused to do anything. We did not look into the matter. At the end of the day it was a matter between TEZ TOUR and the hotel, their mutual relations. On the other hand, one may come to a very simple conclusion. The tour agency could not organize anything normally. Moreover, it did not have normal contacts with the hotel either.

At our first night in the restaurant (we had an all-inclusive tour) we had to spend more than half an hour waiting for the waiter to bring forks and knives. We failed. Being Russian guests at Tropicano Bodrum Club, we had a right to expect basic knowledge of Russian from the personnel. Yet, we decided to limit ourselves to English. We spoke to five people working in the restaurant, including the administrator, but no one of them could speak English. We had to explain our problem in the language of gestures – the waiter brought the setting ten minutes later after he understood us.

Next day we found out that we had to “book” beach umbrellas and deck-chairs at six or seven o’clock in the morning. Dozens of hotel clients were wandering along the beach waiting for at least one deck-chair to become vacant. They stopped giving out beach towels at 4:30 p.m. One day we asked for towels ten minutes later than that. A Tropicano Bodrum Club employee said something rude to us in the Turkish language. Probably, he uttered several bad words. At 7:00 p.m., when the Turkish summer heat became milder, the hotel's personnel started taking deck-chairs away from the tourists, saying that “it was enough for today.”

We never learned where we could play ping-pong, access the Internet, or listen to the live music. We saw ping-pong tables, but we never saw any hotel employees there. The world-wide-web was not provided for clients at all. The live music, as we understood, was replaced with a loud-speaker near our windows, broadcasting early Michael Jackson songs. The mini-club for children did not work in the hotel either. The hotel's employees were simply shrugging their shoulders to our questions about those services.

After we got acquainted with the rudeness and irresponsibility of the hotel, we decided to run away from it with the help of excursions. The impression of the ancient town of Ephesus was only spoiled with the TEZ TOUR guide reading out the political information to us, blaming European countries for the insufficient attention to the Kurdish problem. Most likely, the guide did not know that Homer used to live in that town.

When we visited Bodrum's aqua-park, we were disappointed too. We could not understand how four cups of tea could cost $15. There was no TEZ TOUR guide nearby. We returned to the hotel alone with the driver, who did not know any other language but Turkish.

The holiday with TEZ TOUR at Tropicano Bodrum Club may convince anyone that tourist services in Turkey have failed to reach an acceptable level. Yet, it is obvious that it is not true. That is why, PRAVDA.Ru does not recommend its readers to use the services of the above-mentioned hotel and the tour agency. Nevertheless, we expect an official response from their administrations, so that we could present it to our readers.

PRAVDA.Ru invites hotels and tour agencies administrations, both Russian and foreign, to participate in our expertise.