The scandal around the "Flaming Gothic" performance that sparked on Saturday, February 17, in Nikola-Lenivets Art Park in the Kaluga region of Russia, is gathering pace. 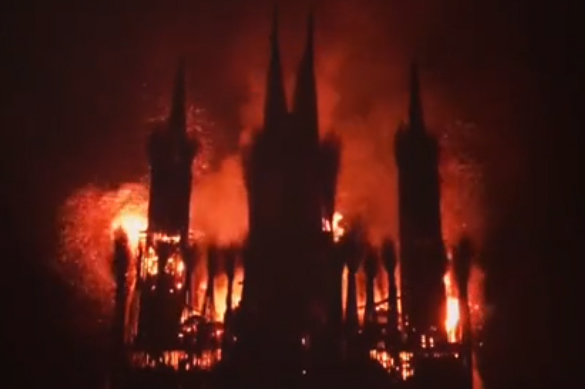 Nikolai Polissky, an architect, burned a 30-meter-high model of a Catholic church on Maslenitsa holiday. The creation made of branches did look like a Catholic cathedral, and architect found himself in the center of a major scandal after he was accused of blasphemous acts committed against Christian shrines.

Traditionally, Russians celebrate Maslenitsa by burning a dummy. However, burning a Gothic cathedral made of branches can only cause confusion among believers, a representative of the Russian Orthodox Church said.

ROC media spokesman Vakhtang Kipshidze said that symbols of Christianity, whether they belong to western or eastern branches, should be respected equally. According to him, whatever creative ideas the artist had in his mind "he should have assumed that burning a Gothic building might evoke associations with a temple belonging to Western Christian culture."

"In addition, we do not live in a political vacuum and we can not exclude involuntary associations with events in Ukraine, where real churches of the canonical church were burnt," the cleric told RIA Novosti.

The architect, Nikolai Polissky, tried to explain his act and asked for apology from all those who were offended by his performance. The architect believes that the media hype surrounding the burning of the model of the church was erroneous. He noted that the architectural style known as "Flaming Gothic" was historically used in the construction of secular buildings, such as castles, universities and vessels.

"There was nothing iconic in my art object, and of course, there were no crosses, no altar and no other religious symbols there. The model was not a replica of any existing religious construction nor was it an imitation of a temple. It was just a fire that was built in the style of a Gothic building," Polissky wrote on his Facebook page. He added that he would be ready to put the project into oblivion should representatives of either Orthodox or Catholic church look into details and find anything sacrilegious about the performance.

"There was nothing sacrilegious in our Maslenitsa, and if someone misunderstood me, I apologize, this offense was caused involuntarily. I did not intend to insult anyone," the architect assured.

ROC spokesperson Vakhtang Kipshidze said afterwards that the believers were not to blame for seeing a Gothic cathedral in flames. In his opinion, one could have avoided this form of misunderstanding if communication with cultural figures had been more active.

It is worthy of note that Russian MP Vitaly Milonov, best known for his legal initiative to ban propaganda of homosexuality among minors in Russia, said in a radio interview that the art performance was an act of extremism.

Nikola-Lenivets Art Park is known as a place, where various art objects are burnt regularly. For example, a pyramid of wood and hay the height of a multi-storeyed building was burnt there in 2017. The names of other artistic objects that were burnt in the park are "Media Tower", "Baikonur", "Cooling Tower, or the Hay Tower", "Firebird."

Maslenitsa  is a Slavic religious and folk holiday, celebrated during the last week before Great Lent, that is, the eighth week before Eastern Orthodox Pascha (Easter). Maslenitsa may be the oldest surviving Slavic holiday. Maslenitsa has its origins in the pagan tradition. In Slavic mythology, Maslenitsa is a sun-festival, personified by the ancient god Volos, and a celebration of the imminent end of the winter.