Russia and many other Orthodox nations started celebrating the Week of Shrovetide, or the Pancake Week, yesterday. And so, unlike on all other “blue” Mondays of the year, you are meant to give it your best at the start of this week, indulging in unrestrained gluttony and merriment. Traditionally it was always thought that a person who has a boring, unpleasant Shrovetide week will be unlucky for the whole of the coming year. So in that case drink, eat, cheerfully usher away the winter and do not forget at the very end to burn a scarecrow. 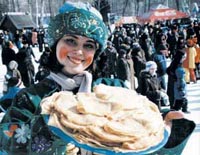 For Russians, Shrovetide is the equivalent of Carnival for Italians, especially as both celebrations have the same original meaning: translated from the Italian, carnival (carne-vale) means ‘farewell to beef’. Shrovetide, which precedes Lent, previously used to be called Meat-Fare Sunday, because it is forbidden to eat meat during this period. Before Lent, Shrovetide is the last week when you are still allowed to stuff yourself with large amounts of rich food, and have whole-hearted fun.

We inherited Shrovetide from Pagan Rus’. Our ancestors tried to use oil to please the god Veles, the patron of crop farming and cattle-rearing. With this aim they would bake circular red pancakes, which are a symbol of the sun.

Each day of Shrovetide week has its own name, which refers to what you are meant to do on that particular day. Shrovetide is not just about pancakes, which in earlier times you could eat at home, at a friend’s house, in taverns and even just on the street. On Shrovetide it is every person’s duty to help to chase away the winter and rouse the land, which is the intention of all Shrovetide traditions.

Monday is “the meeting”. On this day you are meant to set up ice slides: the further the toboggan skates and the louder the noise and laughter over the ice slide, the better the harvest will be.

Tuesday is “gaming day”, when light-hearted games begin and people offer pancakes to accompany the merriment.

Wednesday is ‘the lover of good food’. This name speaks for itself. Hostesses observe the saying: “Offer your guests everything you have and then some”. Of course pancakes are offered above all else.

Thursday is “the day for going wild”. To help the sun chase away the winter, people ride horses around the village along the line of the sundial. The main male activity on this day involves playing at defending and capturing a village in the snow. The young boys and men enter into a fervent battle, whilst the women and children act out the role of spectators, strict judges and passionate supporters.

Friday is “Mother-in-Law’s Evening”. On this day sons-in-law go to see their mothers-in-law, and the mother-in-law offers him pancakes.

On Saturday people go round to see their relatives, and once again they are offered an endless number of pancakes.

As far as the recipe is concerned, the preparation of the pancakes used to be a genuine ritual: the ladies of the house would make everything in secret, so that they could surprise everyone in the morning. For this they would go out in the evening to prepare the sponge dough by the light of the moon shining off the river, the lake or the courtyard.

Modern hostesses, who are unlikely to want to hide from the rest of the house to prepare their pancakes, are recommended to use the recipe for ‘red’ pancakes:

Take 800g of flour and milk, 4 eggs, 50g of butter, a tablespoon of salt and sugar and half a packet of yeast. Add the crumbed yeast to 600g of warm milk, mix together and pour the mixture into the flour, which you should already have sieved. You should beat this in a mixer and place in a warm place for it to rise. In a separate container mix 200g milk, the yolks of 4 eggs, melted butter, then add salt and sugar. Pour this into the dough, mix together, and let the mixture rise. Then add the egg whites, which have been beaten into a foamy consistency. These pancakes should come out relatively thin. They have a typically rosy colour, hence their name seems to have come from the old meaning of the word krasny, meaning ‘beautiful’.

The last day of Shrovetide is Shrove Sunday. Everyone says sorry to one another, gaining forgiveness for their sins before Lent. And in reply people say: “God will forgive you.”