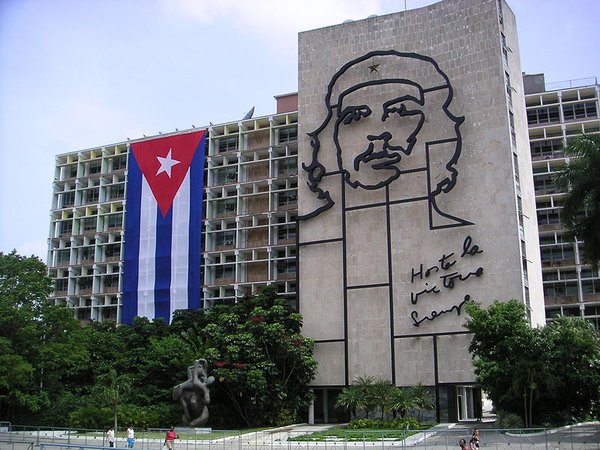 Today October 9 is the fiftieth anniversary of the murder of Ernesto Che Guevara in Bolívia, betrayed by his former companions and handed over to the agents of the Bolivian dictatorship. Murdered, his hands were cut off and his body was thrown into a pit.

Only thirty years later he was given a decent burial in Cuba at the insistence of his companion and friend Fidel Castro, who had his body exhumed and sent to Cuba. Fidel Castro presided over the funeral, at which Che Guevara was given State honors. Here is Che's farewell letter to Fidel. Translated from the Portuguese version by Timothy Bancroft-Hinchey.

Havana, the year of agriculture

At this moment I remember many things - from when I met you in Mexico, at Maria Antonia's house, when you proposed to me join up with you; of all the tensions caused by the preparations ...

One day they came to ask me who they should warn in case of death, and the real possibility of this fact affected us all. Later we learned that it was true, that in a revolution you win or you die (if the revolution is authentic). And many companions fell by the wayside on the path to victory.

Today, everything has a less dramatic tone because we are more mature. But the facts repeat themselves. I feel that I have fulfilled the part of my duty which bound me to the Cuban Revolution in your territory, and I take leave of you, of the comrades, of your people, which is now mine.

I resign formally  my positions in the Party,  my place of minister,  my rank of commander and my Cuban citizenship. Legally nothing connects me to Cuba, only ties of another kind, that cannot be broken with appointments.

Taking stock of my past life, I think I have worked with sufficient integrity and dedication to consolidate the revolutionary triumph. My only serious fault was not to have had more confidence in you since the first moments in the Sierra Maestra, not having understood your qualities as a revolutionary leader with due speed.

I have had magnificent days and, at your side, I felt proud to belong to our people on the bright but sad days of the Caribbean crisis (the Soviet missile issue in Cuba). Rarely has a statesman done more than you in those days; I am also proud to have followed you without hesitation, identifying with your way of thinking, seeing and evaluating the dangers and the principles.

Other lands in the world require my modest efforts. I can do what is forbidden to you because of your responsibility at the head of Cuba, and it is time to separate.

I want you to know that I do it with a mixture of joy and pain. I leave here my purest hope as a builder and the hopes of my dearest ones. And I leave a people who received me as a son. That hurts a part of my spirit.

I will carry the faith you have taught me, the revolutionary spirit of my people, to new fronts; the feeling of fulfilling the most sacred of duties: to fight against imperialism wherever it may be. This comforts me and more than that heals the deeper wounds.

I declare once again that I have freed Cuba from any responsibility, except that which comes from her example. If my time comes under other heavens, my last thought will be for the people and especially for you, to whom I say thank you for your teachings and for your example, whom I will try to be faithful to in the last consequences of my actions; that I have always been identified with the foreign policy of our revolution, and so I shall continue; that wherever I may find myself, I will feel the responsibility of being a Cuban revolutionary, and as such I will act.

I do not regret leaving anything, anything material, for my children and for my wife. I'm glad it's like this. I ask nothing for them, for the state will give them enough to live and educate themselves.

I would have many things to say to you and to our people, but I feel that words are not necessary, they cannot express what I wish; it's not worth scribbling anything else on a notepad.

Towards victory always! Fatherland or death!

I embrace you with all my revolutionary fervor.