The photo and video report about Vladimir Putin's brief holiday in the republic of Tuva in Siberia produced hysterical reactions in Western media. The West has paid a  great deal of attention to Putin's naked torso and his "machismo." Many assumed that there were hidden messages in those images. However, those reactions say nothing about Putin himself. Yet, they say a lot about what modern-day Western elites are made of, the Vzglyad newspaper wrote. 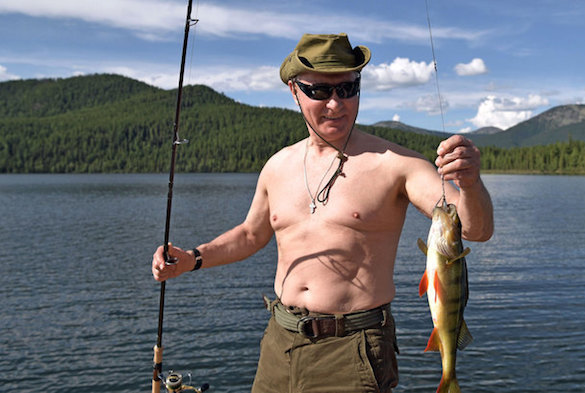 It is not the first time, when Putin goes to the Tuva Republic to enjoy the nature of Siberia. The Russian president developed the fondness to those places with the help of Defense Minister Sergei Shoigu, who is a native of the republic. Putin visited the Tuva for the first time ten years ago, when he invited Prince of Monaco Albert II for a rafting trip down the Yenisei River. The trip ended with the publication of a few photos of Putin on holidays in the wild, including a photo of him fishing shirtless.

Apparently, those photos would have been left in the past and forgotten, if it was not for the attention that they received in the West. The photos of Putin's torso appeared in the year of his landmark Munich speech, in which he announced that Russia did not agree with attempts to build a unipolar world. In Munich, Putin challenged the military-political way of globalization. The same year in the Tuva Republic, the Russian president challenged the cultural and media code of the West. Western journalists immediately dubbed Putin an "alpha male" and said that the photos had been published as part of a conscious game of sexual instincts.

In the Western world, the very concept of masculinity is already blurred and hard to define. All people are equal, and it is intolerant and indecent to stress out differences between men and women. In the minds of Western propagandists, Putin appears as a leader, who does not accept the rules of the game of "joint mankind without races and sexes."

New photos of shirtless Putin have appeared one more time since 2007 - in 2009 - and they were also taken during his holiday in Tuva. The image of shirtless Putin riding a horse has become one of his most popular photos in the United States. That photo has made Putin a phenomenon in US mass culture and political propaganda.

In the United States, many are convinced that Putin exploits the topic of "machismo" deliberately. Many US experts assert that Putin's images of alpha male, his dominant masculinity and sex appeal appear as a product of meticulously thought-out media strategies. Needless to say that common Americans are led to believe that Putin poses semi-naked to photographers all the time - this is the image of the Russian president that US media have planted into their heads.

Even now, after a new series of photographs from the Tuva Republic, Western media again write that "the Russian president is in good shape and is happy to show his torso to the rest of the world." Major media outlets in the United States assumed that it was important for Putin to demonstrate his masculinity on the eve of the forthcoming presidential election in Russia.

The reactions that we can see in the West show the level of understanding of Putin's persona in the West. What can we say in response? First and foremost, Putin does not demonstrate "machismo" - he is indifferent to this kind of stunts. Putin does not think in this category - this is already a deeply decadent concept cultivated in a society, in which the natural structure of family and roles of the sexes have been perverted. Putin shares traditional values, in which there is no place for far-fetched gender problems. Secondly, Putin does not demonstrate his coolness, let alone his physical and sexual appeal, because the Russian culture is discreet at this point, especially if it goes about the head of state. Most likely, Putin did not even think about the undertone of the photos, when he approved of their publication in 2007. The new photos show that he remains in good physical shape. He is not trying to impress his electors because he does not believe in this type of PR stunts. The photos show that the Russian society has a physically fit president.

As for the American society, it is mostly conservative. American people like Putin for being a fighter. Many conservative Americans do not find anything special about the photos of Putin's torso. They are ok with the public demonstration of masculinity.