Confederations Cup in Russia: Lies go on, although to no avail

The FIFA Confederations Cup is coming to an end in Russia. Social media, as well as mass media of the world are full of impressions from the event preceding the World Cup 2018. However, objectivity is not what our Western colleagues can boast of. 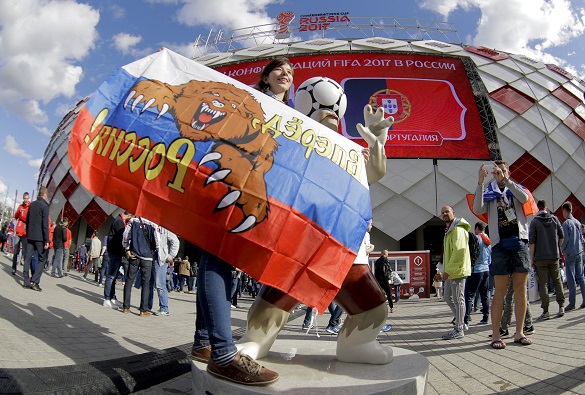 German and British publications were especially good in throwing dust into their readers' eyes. German tabloid Bild urged football fans to boycott the sports festival in Russia just because journalists did not like the rules set for media representatives. When the editorial staff of the newspaper realized that people were not showing much support for righteous anger, the newspaper launched a series of articles about police lawlessness and the supposedly slave labor of North Korean citizens.

The Daily Mail and the BBC decided to have a different approach to the topic. They recommended foreign tourists should avoid popular tourist destinations in Moscow over the fear of being attacked by aggressive football fans. Such stories became popular after riots in Marseilles in 2016, when Russians were accused of mass brawls provoked by England fans.

However, Western journalists were surprised to see no lawlessness, no mass arrests and everything else. On the contrary, foreign guests could see hospitality and highest level of security everywhere.  FSB officials stated on the eve of the tournament that all threats had been detected and eliminated beforehand. Die Welt, another German publication, had to agree: "Russia pays enormous attention to the organization of international competitions. Judging by the current level of security, the World Cup will be even better."

Another anti-Russian story was about the issue of racism. It was said that Cameroon fans were worried about their trip to Russia. However, in addition to the traditionally hospitable atmosphere in the cities where matches of the Confederations Cup were held, Russia fans joined their Cameroonian friends to support champions of Africa in the match against Australia. It would be good for foreign journalists to know that black-skinned people have never been discriminated in Russia. While Westerners were keeping Africans as their slaves, the Russian Imperial Army had a native of Eritrea serving as a general.

Security and hospitality are not the only advantages of the Russian Federation as a host country. Organizers of the tournament introduced a number of innovations in the traditional FIFA system. The most important one was the fan ID and a few perks coming with it. First and foremost, the fan ID replaces the entry visa for the time of the tournament, which significantly facilitates foreigners's entry to Russia. Secondly, for the first time in the history of the Confederations Cup and the World Cup, the host party provides fans with free travel in public transport and transfer between cities. To use these opportunities, one requires to have tickets for matches and the fan ID that people can obtain when buying tickets.

Another important innovation was the system of video replay, which is now tested during the Confederations Cup. The system will be used at the World Cup to ensure objective refereeing and avoid scandals that marred previous international tournaments.

Athletes, fans and journalists were amazed at the level of infrastructure in Russian cities. Germany's head coach Joachim Loew said that he admired the beauty of Sochi and enjoyed the convenience of the sports base in it. German broadcaster ARD sharply changed its opinion about Russia and urged German citizens to visit the World Cup in 2018 praising the level of tournament organization and the quality of football arenas.