Interview: 'The US Must Leave for Peace to Reign in Afghanistan'

Explosion in Kabul, the worst suicide attack in many years in Afghanistan, killed over 100 with more than 400 wounded in May 31. "The only solution to this situation is in the hands of the people of Afghanistan", says Friba, an Afghan Women's leader 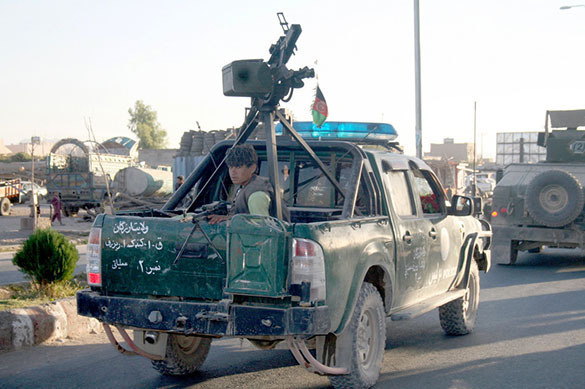 A suicide attacker struck the heavily guarded diplomatic quarter in Kabul with a massive truck bomb during rush hour on Wednesday morning, killing over 100 people, and wounding more than 400. There was no claim of responsibility.

"I have been to many attacks, taken wounded people out of many blast sites, but I can say I have ever seen such a horrible attack as I saw this morning," ambulance driver Alef Ahmadzai told The Associated Press. "Everywhere was on fire and so many people were in critical condition."

Contacted moments after the attack, Friba, the Revolutionary Association of the Women of Afghanistan's representative, said: "Everyone is still rattled. The city died with the blast."

In a short interview, the Afghan women's leader speaks on one of worst suicide attacks in Afghanistan in many years, and the mockery of the U.S. "War on Terror". Friba, who doesn't mention her real name for security reasons as RAWA works underground, unmasks once again local government and intelligence, and U.S. led coalition which promised to free her people 16 years ago, especially the women.

Corruption and alliance with terrorists, according to RAWA's representative, permeates all powers in her country, including the foreign ones. "Traitors that sell their country to aliens obviously do not care about their people or their security. A government that welcomes their killers with open arms despite countless massacres committed by them; and a government whose foreign backers provide these enemies with arms and money!" she says.

Friba states that insecurity has increased in her country after U.S. invasion in October 2001, and the solution is not with any foreign power, but only in the hands of the Afghan people. "Barely a month goes by without one or two attacks that leave tens dead and hundreds of loved ones in mourning." A reality not shown in the West by a mainstream media, supported by weapons manufacturers, which raises the question once again: are some human lives more valuable than others for Westerners?

"'War on Terror' is not actually waged against terrorists, only those terrorist groups that do not comply with the U.S's orders. Just like the U.S., the puppet Afghan government also uses terrorist groups for its purposes. It is no secret that the U.S. actively nourishes terrorism in Afghanistan and the region to attack its rivals, Russia and China," says RAWA's representative.

Below, the full interview with Friba.

Edu Montesanti: What exactly happened and why the Afghan forces, financed and trained by US military, cannot keep your country safe 16 years after US-led coalition invasion to Afghanistan, as attacks like this are frequent and even grow, month by month, in number and intensity?

Friba: The death toll has climbed to over 100 now with more than 400 injured. These are however official statistics which we cannot entirely trust, the casualties may be higher than this. Insecurity in Afghanistan has been the biggest hardship our people have faced after the US invasion.

To begin with, the "war on terror" is not actually waged against terrorists, only those terrorist groups that do not comply with the US's orders. This means that the US and its allies do not target the Taliban or other terrorist groups fighting the Afghan forces, uniformly. In fact Afghan soldiers have witnessed foreign forces' helicopters dropping off weapons in Taliban-held areas, and the payment of huge bribes to the Taliban.

It is no secret that the US actively nourishes terrorism in Afghanistan and the region to attack its rivals, Russia and China - the growing instability and shift of terrorist presence to northern Afghanistan is proof of this policy.

The Afghan apparatus is comprised Jehadi criminals who are lackeys of foreign countries and whose own lives depend on the support of their foreign masters. Traitors that sell their country to aliens obviously do not care about their people or their security. Their only aim is to fill their pockets by taking money from foreign countries and in return, allowing them to influence the state at the highest levels, maintaining their mafia ties, dealing drugs (many prominent Afghan government officials are mafia figures and drug lords), running kidnapping rings, and other such criminal activities.

This greedy mercenary nature of the state also translates into corruption in the high ranks of the military and Defense Ministry. These bodies have been hit with high-level corruption cases, with scandals ranging from land grabbing, "ghost soldiers" cases, and fuel theft worth millions of Dollars, to accusations of collusion with the Taliban.

While Afghan youngsters die on the war front every day, the brethren-in-creed of the Taliban in the Afghan government, propose "peace talks", calling the brutal Taliban "upset brothers". They have released countless dangerous terrorists from jails over the years. It is natural that this entire situation kills the spirit and will of the young Afghan soldiers, dying in battles every day, to fight against these terrorists resolutely. These forces are fighting for a government and military that do not care about them, are deeply embroiled in corruption and rolling about in money; a government that welcomes their killers with open arms despite countless massacres committed by them; and a government whose foreign backers provide these enemies with arms and money!

These soldiers have been deserted by their superiors when they were under Taliban siege, and several bloody attacks on these soldiers have carried suspicions of inside collusion. How can these youngsters fight whole-heartedly in such a situation? Today, the purpose of most Afghan soldiers is to earn a mouthful for their families in this extreme poverty and unemployment, with the salaries they are paid, their intension is not to fight Taliban, as they don't see any major difference between the Taliban and the army generals and high ranking officials who mostly have bloody and dark past and implicated in war crimes.

This is not to mention that the police and army force is already ravaged by illiteracy, drug addiction, and poor management. All these are reasons that the Afghan forces have failed continuously for the past fifteen years.

It is curious that, again, a very safe place has been attacked in Afghanistan - months ago, the Afghan military area was strongly attacked by the Taliban, too. What can you say about the Afghan intelligence?

The situation described above extends to the Afghan intelligence as well. Just like the US, the puppet Afghan government also uses terrorist groups for its purposes, and turns a blind eye to terrorists on the orders of their foreign masters.

According to former intelligence chief, Rahmatullah Nabil, figures within the highest ranks of the government maintain the interests of different foreign countries, yet continue to enjoy their position and the backing of the president - in other words they are "untouchable". Hanif Atmar, senior national security advisor, and Masoom Stanekzai, the intelligence chief, are called the "suit and tie wearing" Taliban by our people for their lack of action against the Taliban, and those figures within the government who serve the intelligence agencies that support the Taliban.

The corruption and absolute breakdown of military leadership means that the Taliban can easily penetrate the capital city, military bases, ministries, military hospitals, and now the diplomatic area. Although commissions are made for investigation of every such incidents, but they never share the results with the public. Everyone knows that such complex attacks are made possible through the help from the within the Afghan security and intelligence agencies.

No group has claimed responsibility: what is said in Afghanistan about the author of this attack?

The Taliban denied any responsibility, and Afghan intelligence have stated that the Haqqani Network inside Pakistan carried out the attack with the help of the Pakistani intelligence. The specific target of the attack is also unknown, which would have offered clues as to which country was behind the attack. Afghanistan has become the center of intelligence warfare between the West and its regional rivals, Russia, China, Iran, and India.

Most regional powers and the US/NATO, are heavily engaged in fostering terrorism and designing plans using terrorist groups as their strategic weapon. If Russia or Iran supports a certain Taliban leader or group, he/they is/are immediately targeted by the US. Similarly, if India supports some group of terrorists, it is immediately attacked by the US, with Pakistan at its heels. In this complex and foggy situation, it is very difficult to ascertain exactly which intelligence agency is behind such attacks, but the US knows this very well and might even have prior knowledge of such attacks, but it never reveals such information. Such is the game ongoing in Afghanistan today.

What must happen to attacks like this have an end?

We have said this before, and will say it again: the only solution to this situation is in the hands of the people of Afghanistan. An end to the US/NATO occupation should be the first step of our struggle for justice, peace and democracy. Occupation and terrorism are two sides of the same coin. If our people are mobilized and organized under a truly democratic and national leadership, and rise up against their enemies - Islamic fundamentalists inside and outside the government and their foreign masters - only then can our country escape from this quagmire.