Most terrible dam disasters in the world

The town of Oroville in California, USA, has received plenty of attention during the recent days because of the tallest dam in the United States that may crumble as a result of the erosion of the emergency spillway. The possible disaster may spill more than 4.3 billion cubic meters of water from Oroville Lake. To prevent the disaster, the authorities intensified the spillway to 100,000 cubic feet per minute. The disaster still continues unfolding, even though the authorities allowed local citizens to return to their homes. Should the dam continue crumbling, the water will flood several settlements, and the scale of the possible disaster will be comparable to the destruction caused by Hurricane Katrina in New Orleans. 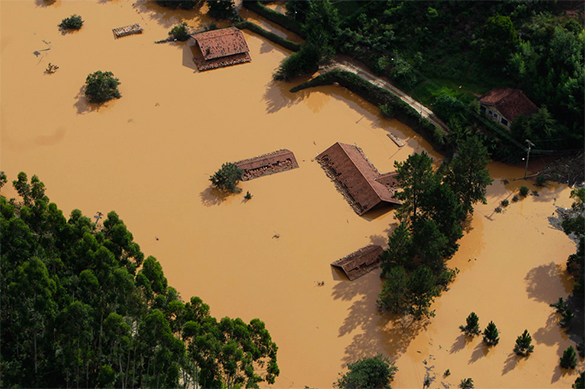 St. Francis dam was a concrete arch-gravity dam that was built to create a reservoir to supply water to the city of Los Angeles.

The dam collapsed three minutes before midnight on March 12, 1928, killing more than 600 people. The St. Francis dam disaster is one of the largest engineering disasters in the United States.

The water from the reservoir rushed down the canyon. The wall of water was 40 meters high. The water destroyed the power plant, located 25 km downstream and flooded the 80-km valley.

The disaster occurred due to the lack of engineering alert during the appearance of first cracks in the concrete dam. A court later found that the control of government agencies on the design and construction of the dam was insufficient. The paleosection underneath the eastern pillar of the dam was found only after the tragedy.

The Soviet administration had to make a very hard, but necessary decision to destroy the Dnieper Hydroelectric Power Plant in connection with attacks of the enemy. Nazi troops intended to seize the dam to be able to break into the city of Zaporozhye.

The explosion formed a huge hole in the body of the dam, thus flooding a vast area in the lower reaches of the Dnieper.

The giant wave washed away several enemy crossings and sunk many Nazi divisions. Yet, the 30-meter wall of water did not distinguish between "us" and "them."

The entire lower part of Zaporozhye with huge reserves of goods, military materials, tens of thousands of tons of food and other property were flooded within an hour. Dozens of ships and their crews perished in the disaster. The death toll and material damage was catastrophic.

Malpasset dam was a concrete arch dam on the Reyran River built approximately 7 km to the north of the town of Fréjus (Southern France, Cote d'Azur). The dam was built for irrigation and water supplies.

On December 2, 1959, Malpasset dam collapsed, and the town of Frejus was completely flooded. As many as 423 people were killed in the disaster (according to official figures); the damage was evaluated at $68 million.

The reasons for the Malpasset disaster had matured gradually: faulty geological survey, builders decided to "save" on quality concrete due to meager funding, the military were conducting explosions in the vicinity of the construction, etc.

Vajont dam was an arch concrete dam near the mountain of Monte Tok in the north of Italy. The dam was built in 1961, mainly for generating electricity.

Heavy rains caused a landslide, when a part of the rock slid into the water reservoir. A wave of water 200 meters high spilled over the crest of the dam.

The water washed away only about 1 meter of the upper layer of the dam, but it was enough to destroy five villages in the Piave River Valley. According to various estimates, from 1,900 to 2,500 people were killed.

Banqiao dam was built in Henan Province of China. The dam is known for the disaster that occurred there on August 8, 1975, when it became the largest of 62 dams that were damaged as a result of Typhoon Nina.

There are different estimates as per the number of victims of the disaster. According to official information, as many as 26,000 people were killed. Ensuing outbreaks of diseases and famine increased the death toll to 171,000 or even 230,000 people.

The flood also killed more than 300,000 domestic animals, as many as 5.96 million buildings were destroyed.

The flooding of the town of Serov on June 14, 1993 was a natural disaster caused by the dam break of the reservoir on the Kakva River in the suburb of the city of Serov, the Sverdlovsk region of Russia.

As many as 1,772 houses found themselves in the flood zone. The flood also destroyed six bridges and washed away hundreds of meters of railway tracks.

The disaster at the Sayano-Shushenskaya Hydroelectric Power Plant was a man-made disaster that took place on August 17, 2009. It is the largest power plant in Russia and the 9th-largest hydroelectric plant in the world, by average power generation. Seventy-five people were killed in the disaster, whereas the equipment of the station was seriously damaged.

The generation of electricity at Sayano-Shushenskaya Hydroelectric Power Plant was suspended. The catastrophic accident caused the engine and turbine rooms to flood, and two 711 MVA electric generators to explode underwater as a result of a short circuit.

The consequences of the disaster affected the ecological, economic and social spheres of the territories adjacent to the power plant.

A dam burst on the Fuhe River in China in June of 2010 due to heavy rains. About 100,000 people were evacuated from the region. Heavy rains in ten territorial units of southern and eastern China killed 199 people, as many as 123 went missing. The disaster affected nearly 29 million people. The economic damage from weather conditions was evaluated at about 42 billion yuan ($6.2 billion).

The dam break on the Indus River in Pakistan took place on August 5, 2010. The flooding destroyed 895,000 homes and more than 2 million hectares of agricultural land. More than 1,700 people were killed. The flood, according to the UN, affected up to 20 million people in the country.

The tragedy occurred on the Qiantang River near the city of Hangzhou in eastern China on September 1, 2011.

Hundreds of Chinese tourists suffered as a result of the dam break on the Qiantang River. Thousands of tourists come to the river every summer to see the tide and huge waves that may reach the height of nine meters. In 2011, the tidal bore was so strong it spilled over the dam, and the water struck the crowd of onlookers.

Hurricane Katrina struck the United States in 2005. The city of New Orleans suffered most in the disaster. The hurricane damaged the dam in the city, and most of the city was flooded.

Both airports of the city were flooded; the water also damaged the French Quarter, famous for its architectural monuments.