Scythian gold flows from Russia to Ukraine because Amsterdam said so?

Amsterdam District Administrative Court ruled on December 14 that the Scythian gold belongs to Ukraine and should thus be retuned to Kiev, rather than to museums of the Crimea, where it was originally stored. 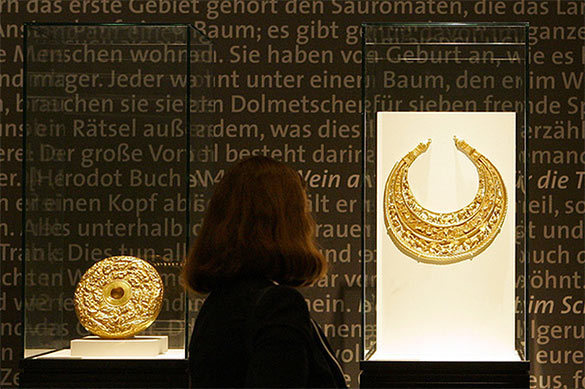 The court proceeded from the fact that the Crimea was not a sovereign country that could claim rights for objects of art. It will be up to a Ukrainian court to decide who should own the artifacts, after they are delivered to the territory of Ukraine.

Russia has three months to appeal the decision of the Amsterdam Court. During this time, the Scythian gold will remain in Holland. Exhibits from museums of the Crimea with an insurance value of more than €1 million were presented at the exhibition hosted by the Allard Pierson Museum, the archaeological museum of the University of Amsterdam. The exhibition "Crimea - the golden island in the Black Sea" was held from February to August 2014.

"Is the recent move as step in the legal plane or is it pure politics? Does Russia have a chance to appeal the verdict?"

"Of course, Russia needs to focus legal efforts to prepare the appeal. It also means that the decision will not be executed until it takes effect. We still have time to submit our arguments to the appellate court.

"The Russian Federation, in accordance with the Constitution and international law, is the only authorized representative of sovereign interests of the whole of its territory. That is, the Crimea has no sovereignty and can not defend its own interests.

"Russia should have been involved in the case from the start. Therefore, Russia has good reasons to overturn the decision of the court of Amsterdam and revise the case taking into consideration the position of the Russian Federation on the subject."

"Does the decision come contrary to the rules of inter-museum exchange? Who is the owner of artifacts - museum or country?"

"A museum acts as a legal entity that operates within certain legal form. This legal form remains under exclusive jurisdiction of the state - the Russian Federation in this case. All entities - commercial, non-profit entities, individuals, museums and everything else that remains on the territory of the Republic of Crimea, remains under the sovereignty and legislation of the Russian Federation.

"Therefore, cultural heritage is a property of the whole people, not just a certain museum. To my mind, this rule was violated, and there is a reason to correct the mistake."