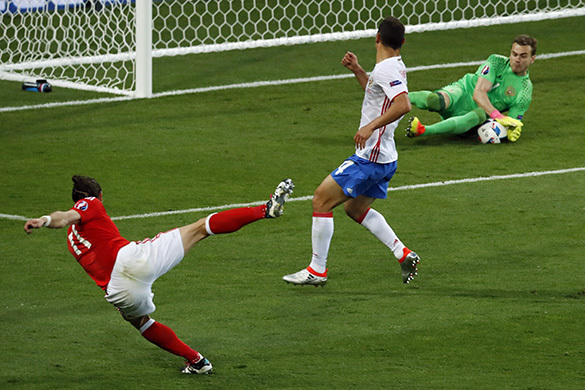 Russia's loss to Wales at Euro-2016 caused a wave of outrage among Russian fans, who did not hope much for Slutsky's team to win.

In the beginning, there was still hope for a better turn of events for Russia's national football team. Russia's match vs. England ended with a draw, and it was quite an achievement. Then Russia lost to Slovakia, but it was still not the end for Russia at Euro-2016. However, Russia's match vs. Wales on June 20 dotted all i's.

Most fans had admitted by the middle of the game that Russia did not have chances to qualify from the group. The weak game of the Russian football players has immediately generated dozens of jokes and made many recall previous major tournaments that also had sad outcomes for the national team.

Many Russian fans praised the Welsh players for their skills, pointing out that it was still shameful for Russia to lost to the team of such a small country. The fans harshly criticized the Russian team for not justifying their hopes.

"The guys came out on the field to die for their country, and they died as early as on the 11th  minute." "Dear passengers, be polite to other people, give place to the disabled, the elderly and to Russian football players." "Russia will play football when Brazil plays ice hockey," people wrote on Twitter.

"No one knows what our players came to France for. Was it for shopping?" "Who put ten turtles into Akinfeev's team?" Solovyov wrote.

"Such a shame! I stopped watching the game at the 15-20th minute. Had more important things to do. I want to support to the end when I can see the fight, the zeal and the desire to win. If Slutsky's players do not know it, I can tell them that there is an information war being waged against Russia, and every victory is the price of gold for us," Nikolai Valuev wrote.

During the first half of the match, after the Welsh scored their second goal, football player Evgeniy Levchenko, who played for the national team of Ukraine in 2002-2009, tweeted ironically: "Meldonium urgently needed!"

"Both Ukraine and Russia are out and they both deserve to leave Euro-2016 in disgrace. We have the same causes and problems. Miracles do not happen," he then added.

The Russian team was defeated by the team of Wales, whose fans were crying with happiness in the stands. The Welshed thumped Russia 3:0, and Russia has left Euro-2016 . Russia's head coach Leonid Slutsky apologized to fans and called for his resignation.

According to Russia's Minister for Sport Vitaly Mutko, Russia's departure from France has demonstrated the level of Russia's football. "Let's face it: we do not have top class players," he said, TASS reports.