Railgun: No-science fiction weapon from times of Ivan the Terrible

The United States has said a lot about the creation of a new type of super destructive weapon. This weapon is known as the railgun. In the United States, journalists have dubbed this new weapon as the "Rods from God." What is so special about the new wonder of modern technology? How can it affect the so-called military balance in the world? 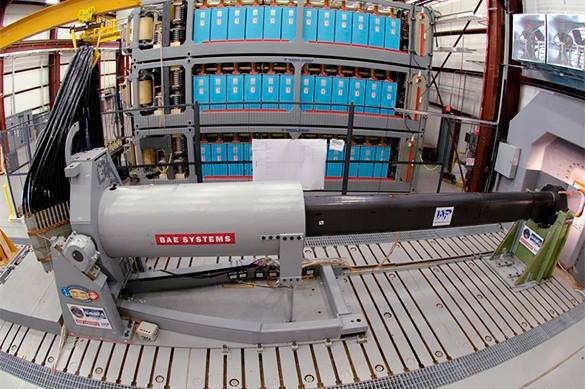 So why a railgun? The weapon has no barrel, and the conductive projectile moves along two metal guides that are vaguely reminiscent of railway tracks.

During a powerful electromagnetic impulse, the projectile is subjected to extreme temperatures received as a result of exposure to high voltage. This aspect completely eliminates the possibility of using conventional explosives in the new weapon, let alone a nuclear warhead.

During experiments in 2008-2016, railgun prototypes shot two and three-kilo projectiles. A standard railgun system is expected to shoot projectiles weighing 9 kg at the speed 6-7 times the speed of sound at a distance of 450-500 km.

In a nutshell, a railgun is like a smooth-bore cannon of the times of Ivan the Terrible that used to shoot solid cannonballs. The only difference is that the speed of the projectile has increased 10-20 times. As in the XVI century, to strike the enemy, one needs to hit the target directly.

Has the Pentagon forgotten about such a thing as the atmosphere? Here are two simple examples. At the end of the 1930s, the Soviet Union passed into service the  12.7-mm DSK machine gun that shot a 48.2-gram bullet at a speed of 840 m/s. According to firing tables from 1938, the limiting range of the machine gun made up 4 km. In a similar table from 1946, the range was halved to nearly 2 km. Was it the matter of the quality of cartridges?

No, it was not. DSK bullets would cover the distance of over 6 kilometers both in 1938, and in 1946. However, it was the so-called ballistic range, when the bullet was flying at a low speed while somersaulting in the air. Therefore, shooting a DSK  at a distance of over 2 km was absolutely useless. Soviet engineers came to realize this only in 1946.

Another example. A modern-day anti-piercing projectile weighing 5.9 kg with a muzzle velocity of about 2000 m/s has the table range of about 2 km. At a distance more than two kilometers, this projectile will not be able to hit a tank, even though the projectile is equipped with stabilizing in-flight drop-down wings.

During WWI, pilots could catch rifle bullets fired from the ground at altitudes of 300-400 meters. In the battle of Borodino, a Russian general was sitting at table in a tent, when a spent light cannonball (weighing 3 or 4 pounds) flew into the tent and hit him in the stomach. The general suffered only bruises and continued working. His clothes were not even damaged.

Judging from what the US military say, railgun projectiles do not have any devices to stabilize their flight. As is known, a common projectile stabilizes during rotation (several thousand rpm), or has wing stabilizers at least.

The Americans say that their railgun will be equipped with GPS-corrector that will ensure precision on the level of five meters at a range of up to 400 km. Please note that the GPS equipment is said to be installed on the gun, rather than on the projectile. The latter will fly without any stabilization at all. This is no-science fiction.

Also read: Can Russia destroy US missile defenses in Europe?

It appears that the "Rods from God" is a perfect tool to obtain funding from congressmen who are not very versed in physics and military equipment.

Interestingly, though, all the problems of sea or ground-based railgun systems disappear in space. Therefore, the "Rods from God", in my opinion, is a very promising space weapon.

In space, there is neither atmosphere, nor scattering. Even a 50-gram projectile can indeed have a circular five-meter error at a distance of not only 400, but even 1,000 km. A projectile this heavy guarantees the destruction of any spacecraft, including a manned space station, like the ISS. Nevertheless, a space railgun will not be able to strike ground-based targets. It could be used as a weapon to combat potentially dangerous asteroids, though.