Americans get closer to building weapon of the future

The US Navy may have the world's most powerful electromagnetic gun - the so-called railgun - during the forthcoming 15 years. The "Weapon of the 21st Century," as Russian specialists described it, was undergoing tests during the recent several years. US defense officials were satisfied with the results. They have already signed the first contract to create the power source for the gun. The railgun needs a lot of energy to accelerate projectiles to supersonic speeds. 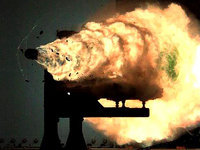 Raytheon Company, one of the USA's largest defense suppliers, signed an agreement with the Naval Sea Systems Command for the creation of the power system for the railgun. The agreement was evaluated at $10 billion, a message on the website of the company said.

In accordance with the agreement, Raytheon undertakes to design and build the power module, which will become a part of the Pulse Forming Network (PFN). In the future, the system can be used for the production of railguns and combat lasers.

"This new system will dramatically change how our Navy defends itself and engages enemies while at sea," said Joe Biondi, vice president of Advanced Technology for Raytheon's Integrated Defense Systems business. "We have the expertise to design and build a solution that provides our warfighters with a decisive advantage over a multitude of current and emerging threats."

A railgun is an entirely electrical gun that accelerates a conductive projectile along a pair of metal rails using the same principles as the homopolar motor. Railguns use two sliding or rolling contactsthat permit a largeelectric current to pass through the projectile. This current interacts with the strong magnetic fields generated by the rails and this accelerates the projectile. Particular characteristics are the lack of propellant (only the projectile and the electrical energy to launch it are required to be expended) and the ability to launch projectiles much faster than firearms-based technology allows.

Railguns have long existed as experimental and demonstrator technology. However, in recent years, some are moving towards becoming feasible military technology. For example, in the late 2000s, the U.S. Navy tested a railgun that accelerates a 3.2 kg (7 pound) projectile to approximately 2.4 kilometres per second (5,400 mph). They gave the project the Latin motto "Velocitas Eradico", which they translate as "Speed Destroys".

Apart from military applications, railguns have also been proposed to launch spacecraft into orbit. Unless the launching track was particularly long (and the acceleration required to reach orbit spread over a much longer time), such launches would however be restricted to unmanned spacecraft.

The USA conducted the first tests of the military railgun in 2008. The tests showed that the system was capable of accelerating projectiles to the speed of 9,000 kmh. By firing at greater velocities railguns have greater range, less bullet drop and less wind drift, bypassing the inherent cost and physical limitations of conventional firearms. The most recent test of a railgun took place on December 10, 2010, by the US Navy at the Naval Surface Warfare Center Dahlgren Division. During the test, the Office of Naval Research set a world record by conducting a 33 MJshot from the railgun

The goal of such tests is to build a new weapon system for surface vessels. When completed, railguns will be able to shoot projectiles at distances of up to 400 kilometers. The main advantage of the electromagnetic gun is that it poses no danger for the crew. There are no explosives used in the system.

Russian military experts admit that the railgun is a prospective weapon system of the new century. The destructive force of the system is very high. The range of the new complex is comparable to the range of missile systems. Since there is no explosive used, the projectiles are safe and lighter.

As for disadvantages, railguns can easily unmask the vessels on which they will be installed. In addition, the system needs enormous mounts of energy for work. To solve this problem, one would have to build a new generation of vessels with the energy system that would supply enough energy to both their engines and weapon systems, Russian officials noted in 2008.

In the middle of 2011, the US Senate was going to cut the funding for two most "futuristic" defense projects - the railgun and the combat laser. President Obama rescued the "weapon of the 21st century" when he signed the decree to continue the development of railguns. First railguns are to appear on US vessels by 2025.

Americans get closer to building weapon of the future