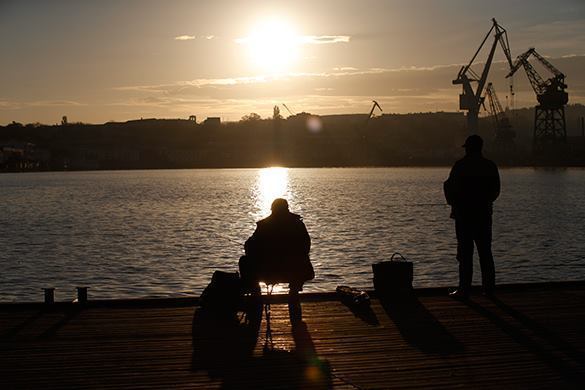 Janusz Korwin-Mikke is a Polish deputy of the European Parliament. For years he has the label of an "ultra right" politician attached to him, even though the parties headed by him never have extremist names. During his initial success two years ago, Mr. Korwin-Mikke's party was named The New Right. Now Mr. Korwin-Mikke is the leader of the Coalition for Renovation of Poland "Freedom and Hope" (the Polish abbreviation for the name of this political movement is KORWIN). He took part in the Polish presidential election in 2015, getting 486 votes. Mr. Korwin-Mikke is known for his independent political views, last month he made a trip to Crimea, braving the EU's restriction. He later faced a lot of criticism for that trip from both the Polish and the Ukrainian authorities. Dmitry Babich talked to Mr. Korwin-Mikke about his opinions on the future of the Russo-Polish and Polish-Ukrainian relations, as well as on the future of Poland inside the EU.

"Mr. Korwin, what was your main impression about your trip to Crimea?"

"Crimea is a great place, but it is visibly underinvested. It is visible, that the place has not been getting sufficient money injections for at least 15 years. So, my prescription for Crimea is just more investment and more free market. If Putin really manages to get a free economic zone installed there, that would do the locals a great service."

"How did people react to the recent changes, when Crimea stopped to be a part of Ukraine and became a part of Russia?"

"About half of the people whom I met in the street were optimists. They said life became much better, they viewed Russia as a better manager of their territory than Ukraine. The other half were somewhat less enthusiastic, they said something like: "Yes, in some ways life is better, but there are new problems." But I did not meet anyone who would say life is worse now than it was under Ukraine. I must add, though, that I probably did not have enough exposure to the Crimean Tatars. There were three persons from the local Tatars' public organizations, and they sounded pretty satisfied with Russia's performance. OK, I realize that they don't represent the bulk of the Crimean Tatar people. The real picture may be a lot more nuanced."

"What was the attitude of the people in Crimea to Ukraine's energy blockade of their peninsula? Were you in Crimea when there was an electricity shortage caused by the destruction of the energy lines by the Ukrainian nationalists and the so called "Crimean Tatar activists"?"

"This energy blockade was condemned by everyone. And even those Crimean Tatars which were initially pro-Ukrainian became pro-Russian as a result of this blockade from the side of Ukraine. As a result of its inability to stop the illegal actions of the "activists," the Ukrainian government further lost in the opinion of the people in Crimea."

"You are known for the independence of your opinions, for your ability to counter the so called mainstream views in your native Poland. Right now one of the strongest stereotypes in the Polish media is the positive view of the Maidan revolution in Ukraine. The Polish media try to present it as a positive event, writing off all of the subsequent horrors on the "Russian aggression" and the endemic corruption of the Ukrainian state. What is your take on Maidan?"

"I don't share the mainstream media's illusions about this event. First, it was a very violent revolution, dozens of people got killed. Second, its consequences are not going to be good for Poland. When I publicly questioned the wisdom for Poland of giving full support to the protesters, I was blasted by the Polish media. But who else was guilty of the murder of the two dozen policemen and probably of about sixty civilians? The Polish media did not want to look for the answer, they just accused me of being on the payroll of "Putin's propaganda."

"But why do you think the coming to power of Ukrainian nationalists in Kiev was not good for Poland? The Polish mainstream media viewed the victory of Poroshenko as something that would strengthen Ukraine's independence and Poland's security..."

"The media and the public opinion in Poland have a somewhat outdated vision of what the Ukrainian independence is. They have similar misconceptions about, say, the Lithuanian independence. Poles still view Ukraine, Lithuania or Belarus through the prism of "liberating" these countries from Russia's yoke. This could make sense in the Soviet times, but it does not make sense now. Ukraine, Lithuania, Belarus are now indeed independent countries. And as new independent countries they have some scores to settle with Poland. Ukrainian nationalists have some territorial claims against Poland, even if the Ukrainian state does not announce it officially. We should not forget that the supporters of  [the pro-Nazi Ukrainian nationalist leader of the 1940s Stepan] Bandera killed thousands of Poles in 1943 and 1944. So, under the new nationalist leadership Ukraine becomes a potential enemy of Poland. In this situation, Poland's relations with Russia may be built on the principle "an enemy of my enemy is my friend." We should probably be grateful to the Russian president Putin for the fact that Ukraine keeps most of its troops in its eastern borderlands, and not on the border with Poland."

"This is a logical view, but it is rare to hear from politicians in Poland..."

"There are some Polish politicians who hate Russia even more than they love Poland. I don't belong to their group. I love Poland before anything else."

"Waszczikowski is a troubled spirit, and I think in the near future he will have his hands full distributing diplomatic positions among various people. He is just glad his party (Law and Justice - PiS in Polish abbreviation) won the election."

"Do you share the view of some European experts that the government controlled by the Polish nationalists from PiS will be dangerous for Poland?"

"I would not really give the name of the Polish nationalists to all of these people from PiS or from the Civic Platform (Platforma Obywatelska - PO, the second biggest party in Poland). PiS is rather pro-American, while PO was more, like, pro-German. But I have doubts about them really defending the Polish national interests.  The foundations of their policies are shaky. They are hooked to the EU, and I won't be surprised if the EU ceases to exist in a few years.  Polish policy should be founded on a more sophisticated network of alliances than just throwing our lot together with the EU."

History does repeat itself: Crimea

Crimea and Russia are now inseparable