Khrushchev vs. Stalin: Dwarf vs. Giant

The XX Congress of the Communist Party of the Soviet Union took place in Moscow 60 years ago. The backstage secret speech denouncing Stalin's personality cult became the most notable event of the month of February in 1956. The criticism of the cult of personality was voiced at a closed meeting of the Central Committee of the CPSU after the congress closed. 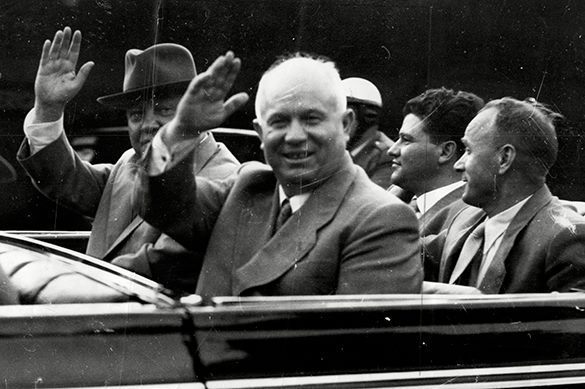 When marginalized, Nikita Khrushchev made audio records of his memories that he subsequently sent abroad. When serving as the all-mighty General Secretary, the First Secretary of the CPSU Central Committee ordered to twist the arms of Boris Pasternak to make him refuse from the Nobel Prize in Literature. Khrushchev's recordings count about 300 hours, where, among various types of nonsense, he was the first to compare Stalin's crimes with Hitler and Mussolini crimes.

Pravda.Ru asked a few questions on the subject of Stalin's personality cult in an interview with candidate of historical sciences, associate professor of history of socio-political doctrines of the Faculty of Political Science and the Moscow State University, Kirill Anderson.

"It was a tradition of the Politburo to speak about important issues as quiet as possible, without advertising anything. The XX Congress was a little embarrassing, because foreign fraternal communist parties had not been warned against the intention to revise the role of Stalin in history. For them, the news came as an unpleasant and unexpected surprise.

"During the days of the Congress, foreign communists would praise Stalin in their comments, but then everything suddenly changed. Furthermore, the matter was about Stalin's personality and his drawbacks, rather than about the drawbacks of Stalin's regime. They cracked down on Stalin, but not on the Stalinist system that was built on the hyperbolic role of the state and the omnipotence of the bureaucratic machine.

"There were many techniques and methods of the Stalin era in Khrushchev's actions. They were  renouncing Stalin, but not Stalinism, so they decided not to make a big show out of it."

"During the time of perestroika, some "hotheads" from the USSR asked Chinese communists, why they did not debunk the cult of Mao Zedong after his death. They were told that the Soviets had not done anything like this about Lenin, and Mao Zedong in China was like Lenin and Stalin all rolled into one. If Stalin were such a figure for Soviet Communists, would they delay his dethronement?"

"The Chinese are very cautious and prudent people. They determined the percentage of Mao Zedong's good and bad actions. The Russians traditionally rush from one extreme to another, out of the frying pan and into the fire. In principle, one may say that if the process of eliminating Stalin's legacy had been more gradual, it would have been possible to retain a greater authority of the party.

"The Chinese never rush. For them, Mao Zedong remains a great name, the creator of the People's Republic of China, but they refuse from Maoism, keeping the image of Mao at the same time. In the Soviet Union it happened vie versa: we preserved Stalinism, but renounced Stalin. We are not the Chinese, you see."

"Did the struggle for power among the then Soviet elite contribute to the emergence of the private report about Stalin's personality cult?"

"It was partially about the struggle for power and the need to abandon errors, blunders and mistakes that were made in the past. Whenever a new boss comes, he sweeps away the dust from the seat of his predecessor in the first place. Afterwards, he has to deal with a variety of problems that he can not solve, so he has to explain why he can not do it."

"Why did the Communist Party step away from the policy of the thaw after Khrushchev was removed from power?"

"This is a question of the struggle for power. There were internecine conflicts inside the Politburo. Apparently, the thaw had gone too far, and the idea of ​​strong government came back. It was transition from pseudo or semi-democracy to strong power. Plus, one had to show where Khrushchev was not right. It was a move away from Khrushchev and his positions.

"The years after the XX Congress - "the years of the thaw" in the Soviet Union - contributed to the emergence of dissidents, but it was not them, who destroyed the country - the country's administration did it. Was it the result of the congress?"

"You know, the victory of the revolution indicates the weakness of authorities, rather than the power of revolutionaries. There was dissidence in Stalin's time, although the movement was called differently. The resistance to the Stalinist regime, the resistance to the Soviet regime existed throughout the years of Soviet power. It was not dissidents, who destroyed the country - it was the elite that was incapable of ruling the country. Similarly, the Russian Empire collapsed largely because of the mistakes that Nicholas II made. The Soviet Union broke up mostly because of Gorbachev's mistakes. A revolution is a sign of weakness of elite."