German journalists are intimidating the people of Germany with a moth-eaten scarecrow of the so-called Russia's threat. German publication Bild has recently published an article that said that the Russian Federation had bombs with such slogans as "To Berlin!" and "For Stalin!" written on them. Yet, the Germans accused the hapless journalists of spreading biased information. 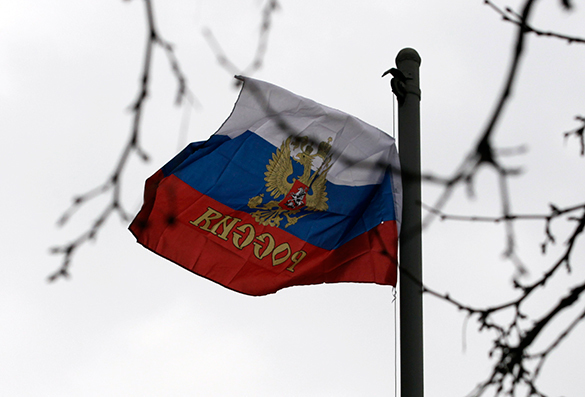 At first, the German tabloid Bild wrote about "Makaberes Manöver" (Macabre Maneuvers) in Russia, having posted screenshots of the photo report from the Central Navy Portal. Some of the photos depicted images of aviation bombs with the following inscriptions in Russian: "To Berlin!" and "For Stalin!" The Bild journalists were quick to come up with the headline "Verstörende Bilder aus dem russischen Kaliningrad" ("Disturbing Images from Russia's Kaliningrad)".

The message of the small article, published on Tuesday, said that only 500 kilometers from the German capital, where the military exercises were taking place,  the Russians were using a deadly weapon that said "To Berlin!".

According to the author of the article in Bild, such inscriptions should be regarded as either a "bad joke" or "a bitter glance at Russian reality in 2015". The German tabloid wrote that the slogans on the bombs were expressing nostalgia for Soviet times and dangerous trends in the Russian government and the army.

Russian pilots were practicing missile attacks and bombings from Su-24, An-26 aircraft, as well as Mi-24 and Ka-27 helicopters. The An-26 aircraft were used in the drills for the first time in two decades.

Spokespeople for the Russian Defense Ministry said that the photos that were posted on flot.com, were either "stupidity, photoshop, or simply a desire to play with the topic of anti-Russian sentiments." However, Sergei Sochevanov, acting editor-in-chief of flot.com, confirmed in an interview with "Moscow Speaking" radio station that "the pictures were indeed taken during the joint gathering of naval aviation. He also confirmed that the inscriptions had been made on a training aircraft bomb.

Pravda.Ru decided to present some of the view of German bloggers about the article in the German tabloid.

The Germans see only the evil Russians

"Perhaps, Russian soldiers have been making such jokes for quite a while, - a user under the moniker herpina derp wrote. - Is there an army in the world that doesn't do such things? However, people all over Germany started whispering: Oh, my God! Putin wants to bomb us ... That's rubbish. We can see only the evil Russian, while the United States is destabilizing the entire Old World. "

Klaus Oertel: "During WWII, the Soviet Union (Russia) did not have enough bombers. There were no aerial bombings of German cities. Bomber military aircraft of the Russian aviation were active in the tactical use in aerial combat against the German Wehrmacht. This type of inscriptions on bombs was common practice in the Air Force of the United States."

"A week ago I was in Russia and I saw, among other things, a sticker with the same inscription on a car. I joked that if I were a Western journalist, I would write a frenzied article about these dangerous, crazy Russians. And here we go - we have an article like that already. Is local journalism dangerous propaganda or satire?" Florian Geyer wrote.

Lada Polinska wrote: "Tasteless, although harmless. The Russians are much easier and smarter towards their history than the Germans."

Sonja Meier: "During the Second World War, such inscriptions were considered a cry against Nazi Germany. For me, it's better to see a training bomb "To Berlin" falling on a Russian military training ground than having an American 100-kilo training bomb to cause forest fires in our beautiful Bavaria."

Georg Henzler recollected the famous joke by Ronald Reagan. Assuming that the microphone was off, the US president said: "My fellow Americans, I'm pleased to tell you today that I've signed legislation that will outlaw Russia forever. We begin bombing in five minutes."

Russia won't give the Crimea back as Germany wants