Argentine referee German Delfino has the world of soccer in uproar for doing the right thing, namely reversing the decision to mark a penalty kick and send off a player for handball after an auxiliary saw the incident on video and informed him of his wrong decision. Delfino's courage has landed him in trouble, however. 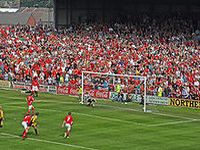 The Argentine referee booked a player for what he perceived as handball in the penalty area, then showed the player a second yellow card (meaning a red card and therefore an expulsion) for protesting, and marked a penalty kick... only to change his mind when the linesman consulted a video and informed the referee he had made the wrong decision. Now the ref is in trouble, for doing the right thing.

The incident occurred this weekend during the match between Argentine sides Velez Sarsfield and Arsenal, the eighth match this season in the Argentine soccer championship. Velez Sarsfield  was attacking on their home pitch and striker Mariano Pavone disputed the ball with Arsenal defender Daniel Valencia. It seemed as if Valencia had handled the ball in the area, and so referee German Delfino, 36 years of age, one of the most respected in Latin America, pulled out the yellow card, signaling an infraction, and awarded Velez Sarsfield a penalty kick.

Daniel Valencia protested his innocence and was awarded a second yellow for contesting the referee's decision, and was therefore sent off (two yellow cards equals a red card, which is expulsion from the game). Uproar ensued among the visiting players and coaching staff.

However, the linesman Ivan Nunez saw a video replay of the incident and saw that it was not Valencia, but the Velez Sarsfield striker himself who had handled the ball, and informed the referee through their communication channel.

Before the penalty kick was taken, referee German Delfino annulled it, and called back the expelled player, annulling his red card, and awarded a yellow card instead to the striker, Pavone, courageously reversing his decision to impose what he considered to be right. Uproar ensued among the home fans.

However, the use of video conferencing to check decisions made by referees is not allowed in soccer (as it is in certain other sports) and now the referee's future in the game lies with the Argentine Football Federation which will decide his fate. This may mean a temporary ban from the game. For doing the right thing.

However, the referee considers he was correct. After the game he said it was a horrible time he passed through but "I am going home in peace knowing I did the right thing".

The incident can be seen on You Tube with the title "Penal anulado".