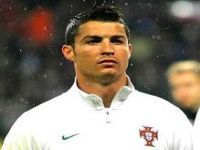 Cristiano Ronaldo won his third title of best soccer player for the year, after the Ballon d'Or for Best European Player in 2008, and simultaneously, the FIFA Best Player of the Year in the same year, and the amalgamated title, FIFA Ballon d'Or, in 2013 and 2014, after a marvelous season in which he scored 60 goals in 61 appearances and helped Real Madrid to the FIFA World Club Championship, the Champions League, the UEFA Super Cup and the Spanish Copa del Rey.

Signaling his victory with the words "I would like to thank all of those who voted for me, my president, my coach and Real Madrid. It has been an unforgettable year. To win this trophy at the end of it is something incredibly unique, " Ronaldo obtained 37.66% of the vote, Messi had 15.76% and Neuer 15.72%.

Those who work close beside him will vouch for the fact that he is always the first to enter the training ground and the last to leave, practising free kicks, and then many times going on to a multi-gym to do even more training, leaving fellow professionals gasping for breath, telling him "That's enough!"

Finally, the charity work and donations made by Cristiano Ronaldo reveals an inner greatness which few have written about, making him at 29years of age an excellent ambassador for his club (Real Madrid), as he was before for Manchester United and Sporting CP, and for his country, Portugal, which he almost single-handedly fired into the 2014 FIFA World Cup Finals in Brazil, yet after the two play-off games with Sweden (in which he scored four goals including a hat-trick in Stockholm), he declared modestly "I was just doing my job".

Today, Cristiano Ronaldo is the best soccer player in the world, and this is the fruit of his own hard work, professionalism, intelligence in managing his career and his image in a white-hot world of media intrusion. The notion remains that from Cristiano Ronaldo, there is still much more to come, both on and off the soccer field.