OK Easter is over, another few pounds added after the Christmas binge and New Year's Eve parties, January through April was too cold in the northern hemisphere to eat salads and the Summer season jetting off to the Triple-S sunshine, seaside and sand package is two months away. But whoops, one in three males cannot see his penis over his swollen gut and over half the women are overweight. Two in three adults are overweight, in fact, in some countries. 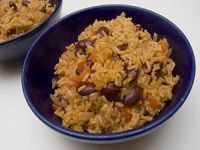 The intention here is not to write about the developing world having problems putting a crust of bread on the table and launching into an attack on the western countries, where one in three people are considered obese, swollen through sheer greed, laziness and bad lifestyles. Especially so because these days, with the wonderful boom-and-bust monetarist economic cycle hitting another crisis, there are growing numbers of people in the European Union and northern America also facing the same problem. For instance, one in seven children in the UK experience hunger.

Not so long ago, on a trip to a country in the European Union, I was standing in a supermarket line-out behind a man, morbidly obese, pushing a cart laden with some of the worst foods you can buy: processed meat (bacon, fresh sausages - which are basically sinew, lips and, pardon me, as*holes), frozen ready-made microwave meals, potato chips/crisps, doughnuts, margarine, microwave popcorn, carbonated drinks, "plastic" white bread (ready-sliced in plastic bags, which contains, wait for it, chicken feathers), packets of frozen burgers, some cheap cut-price chickens (do some research into how they are reared in battery farms). You name it, it was in there.

As he saw me eyeing his cart, he looked into mine, brimming with fresh fruit and vegetables, including lots of greens, pulses (black beans, white beans, kidney beans, black-eyed peas, lentils, peas, chick peas, edamame, which is soy beans), no butter or dairy products but some almond milk, no meat, poultry or fish but some tofu, some seitan, some tempeh, some soya, long-grain brown rice, quinoa, couscous, bulgur wheat, nuts, pumpkin seeds, some flaxseed, some sesame seed, chia seeds, some wholemeal flour for making bread and some seaweed. In two words, my staple shop for the month.

I asked him if he was interested in my shop, and he said, yes, and was I a vegetarian or something, smirking in derision. I said no, actually I am a Vegan, at which point he glanced into my cart, saw the seaweed, looked like someone had rammed a poker somewhere, shuffled forwards a couple of steps and turned his backside away from me... and then went to buy a packet of cigarettes after passing the check-out. I could literally hear him thinking "OK this guy eats seaweed, he's a..."

Had the conversation continued, he would have asked me "so what do you do for meat" and "so what do you eat"? The answer to those commonly-asked questions is "I don't" and "practically everything".

The first question is actually a very pertinent and good one, because we are brought up in a "meat and two veg" society and (as was my case) we are brought up to believe that our protein comes from meat, fish, poultry or seafood. It does, but not exclusively. For example, many of the foods I mentioned above (the pulses, quinoa, pumpkin seeds, seitan, tofu, soya and so on are good sources of protein as are chick peas, as is broccoli).

The answer to the second question is to take the enquirer to the vegetable section of the supermarket, make a sweeping movement with the arm, starting at the beginning and indicating the end, and to say "all of that", then do the same with the fruit, then the dried nuts, grains and pulses, rice and the section with tofu, seitan and so on.

Getting started and difficulties

As with a diet that includes animal products, you have to season things. One of my friends greeted the news that I had decided to go Vegan (again - yes I have had numerous lapses) with "Ah so you're going to eat boiled potatoes and cabbage... no thanks". I replied as follows: "So you get this date with an interesting lady and you are going to bore her all evening with stories about the toilets on your camping trip to France, or you are going to make an effort and try to be interesting?"

If someone asked me what the magic word is, I would say "variety", if someone asked me for a two-word solution, I'd say "common sense" and the three-worder is "Get yourself ready". A larder with three potatoes and a rotting carrot combined with a fridge containing the habitual third (in the western world) of rotting muck which is thrown away every month and half a dried cabbage is as appetizing and inviting as half a can of sausages and a piece of stale bread.

To get started, you need as many herbs as you can manage to buy, and a basketful of fresh fruit and vegetables, plus as many of the ingredients mentioned above as possible. Obviously, you have to respect the cooking times as you do with meat or fish, then you can have fun combining foods, like rice and quinoa, seasoning foods like couscous and coriander, like quinoa and jalapeno (hot pepper).

Personally, I start a meal with a salad made up of several ingredients (for example today it was pickled cucumber, olives, celery, chopped jalapeno, sesame seeds, seasoned with sesame oil and fresh basil) and I make the salad at the beginning of the day, keeping it in the fridge. When I am hungry between meals, I have a small earthenware bowl which I fill with this salad (I used to have three or four slices of "plastic" bread and butter, and cheese). I also try to have several small bowls with boiled pulses (lentils, beans, chick peas, black-eyed peas) in the fridge at any one time, to make it easier and faster to put a snack or meal together.

My evening meal will be quinoa seasoned with oregano and black pepper, mixed with pine kernels, steamed broccoli and a seaweed side dish seasoned with sesame seeds and oil. I aim to accompany it with two flatbreads which I shall make as the broccoli is steaming. My dessert will be a mango.

True, it's quick and easy to slap something in the microwave and press the button. But it's also quick and easy to make your own bread and biscuits, it's quicker and easier to make your own flatbread - it takes literally five minutes (wholemeal flour, water, mix, make into a ball, break a piece off, make a small ball rubbing it together in your hands, roll it out and put it on a hot frying or griddle pan, then sear it on the gas ring/electric plate to get that burnt "charred" effect and it makes a great snack - fill with seasoned pulses and lettuce, for instance.

With time, as you build up recipes (the internet is full of them) and as you realize you need to have a full range of ingredients before you start, you learn that putting together a delicious Vegan meal is as quick as or faster than cooking meat (how long does a joint of roast lamb take?) and the rest is a question of imagination.

If you eat a good variety of foods (and again the internet is full of information on nutrients required daily), all you need is to watch your Vitamin B12 (this is a debatable point among Vegans) and that is a question of a supplement taken daily or weekly.

You will sleep better, you will feel better, you will lose weight naturally... and then after three months measure your cholesterol, triglycerides, blood glucose, Gama GT and blood pressure levels.

Think of two scenarios: a herd of animals being pushed screaming into a slaughterhouse to be butchered and served on plastic trays in supermarkets, stuffed full of growth factors, hormones, steroids and God alone knows what else, and another scenario, with the food lobby rubbing its hands in glee as their human guinea pigs obediently stuff themselves with the wrong fats and sugars (a lot of processed food has its nutrients removed then pumped back in artificially to make people want more, feeling rewarded and getting hungry in cycles, as they put on weight, become obese and their body chemical levels spiral out of control), then at age 35 plus, these same guinea pigs become patients for the pharma lobby, spending the rest of their lives on drugs or in hospitals. The result is the same.

The bottom line is, would you allow someone else to poison your child? Then why do you?