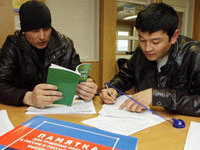 Such neighborhoods are not typical for Russian cities. When it comes to ghetto, the first thing that comes to mind are American and European cities where ethnic neighborhoods come as no surprise.

Although the formation of these neighborhoods can hardly be called a deliberate policy, recently it has been the government that has taken the initiative in this matter. For example, in France, Paris pronounced the establishment of a Roma settlement in the 16th district that is incidentally quite prestigious and hosts a number of diplomatic missions, including a Russian one.

The initiative received the support of the Prime Minister of France. According to Jean-Marc Ayrault, there are no reasons to reject the idea. The head of the French government believes that there is nothing wrong with the fact that the county will be the home for Roma, that their children will be able to attend schools, where health facilities will be available and jobs will be created.

However, this initiative (promoted by the left) has plenty of adversaries. Of course, there are no guarantees that it will be supported by the City Hall, but the example is significant. If before the formation of ethnic neighborhoods was spontaneous, now the authorities of some countries are trying to make it manageable. If there is no strength to fight them, it is best to take control over them, this seems to be the logic.

Should Russia look closely at these attempts? It seems that there are no formal ghettos in Russian cities, but in Moscow there are areas (especially in the south, east and southeast of the city) where a significant number of residents are from the Caucasus republics and the Central Asian states.

However, as shown by a small survey conducted by Pravda.Ru, this idea does not enjoy much support.

Vladislav Grib, vice-president of the Russian Union of Lawyers:
"No, it can increase the tension. These enclaves will operate according to their own laws. We're not ready for it, frankly. We have to establish cultural centers, friendship centers, and national cultural centers. Ethnic areas will have quite the opposite mission. People will be afraid to go there."

Sergey Krivenko, a member of the board of "Memorial" society:
"In what sense do you mean ethnic areas? Are they settlements where residency is based on certain ethnic features? Will they be specially organized? I think it is impossible to organize. In what way? Would you make people of different nationalities or any particular ethnic group live in a particular area? In my opinion, this is unrealistic.

We have the policy for the conservation and multicultural traditions and the preservation of cultural values ​​of each people and each culture. The dialogue of cultures is of primary Importance. This idea would just create different small principalities. In the end, they will create aggression against each other. In the modern world it is impossible to make such enclaves.

The world is open, the world is moving in the direction of maximum transparency while maintaining the possibility of using native language, culture, traditions if they do not contradict some common values."

Maria Arbatova, a writer:
"I think that ethnic areas known worldwide as enclaves are the worst thing that occurs in the migration policies of developed countries. They become breeding grounds for crime, a place where terrorist associations are formed, a place where people do not learn the local language, do not adapt to the country where they reside.

Therefore, anti-enclave policy is a goal of any sane executive power that analyzed the situation.
What's happening in Berlin, for example, when you get to those subway stations where the Turkish area begins, where you are completely unprotected if you are not a Turk?

What's happening in France, where municipalities pay money so cheap public housing is not built on their territory? They want all marginalized individuals and immigrants to live in a parallel world. As a result, they form separate streets that stretch to downtown Paris where you do not know in which country or what century you are.

Therefore, the only solution is anti-enclave resettlement, adaptation to the language, culture, law, mentality. The person who comes into the country as an immigrant must adapt to its laws, its customs and become a citizen and not a citizen of the enclave that has its own laws or rather, total lawlessness."