Anonymous hackers will not tolerate failure

International hacker group Anonymous reacted traditionally to the NSA spy scam, which was unveiled by Edward Snowden. The group hacked the passwords of hundreds of employees of the U.S. Congress. The unidentified hackers, by their own admission, posted on the net the list of allegedly official email addresses and passwords of current and former members of the Congress. 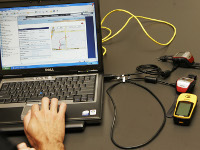 The list was published on a service of Twitter, which belongs to Anonymous hacker group. It was also reported that the published data had been muddled; several passwords were removed from the list to protect the authors of the publication in the social network.

System administrators of the Congress quickly responded to the attack by sending e-mails to all employees with instructions on how to protect their personal information and access to email accounts. Meanwhile, the messages sent by system administrators of the Congress to various online publications, including The Atlantic Wire, said that the exposed passwords were fake.

With this action, the hackers, according to their own statements, wanted to warn the U.S. government from taking erroneous actions after the exposure of the secret activities of the NSA: " We mean it. This is a pivotal moment for America, and we will not tolerate failure."

Anonymous is not a separate group of isolated hackers, but a well-organized mass movement, whose members advocate free flow of information, freedom of speech and oppose censorship. The activists have made hacking attacks on the websites of U.S. banks and other financial institutions that refused to transfer donations to Wikileaks founder Julian Assange.

The potential of Anonymous hacker group can be seen from the fact that the group has succeeded a lot from working worldwide, not only against Americans. The list of their victims includes Germany's Free Democratic Party (FDP) - the group exposed passwords to accounts of 37,000 members. FDP General Secretary Patrick Doering publicly confirmed the hacking of the FDP website and his personal page on Facebook. He addressed to the board of Universum Kommunikation und Medien AG, which is responsible for the technical support on the Internet, asking them to update the passwords for all users of my.fdp.

Moreover, Anonymous hackers exposed the passwords of Germany's Economics Minister Philipp Rösler and Foreign Minister Guido Westerwelle. A message posted on Twitter on behalf of the members of Anonymous Germany stated that the action was taken as a protest against the decision of the Bundestag, which obliged the sellers of telecommunications services to collect information about their customers to subsequently hand over the information, if necessary, to law-enforcement authorities.

Exposing passwords to personal accounts is direct interference in private life. According to Anonymous, it is also a direct violation of constitutionally guaranteed rights of German citizens.

Anonymous group also hacked online platform julis.de., which belongs to Young Liberals (Jungen Liberalen, abbreviation - JuLis), the youth wing of the FDP. The hackers published the list of names, email addresses, passwords, home addresses and telephone numbers of more than 10,000 members of the organization. One of Free Democrats, calling the hacker group Anonymous "vile online terrorists," pointed out that he had a feeling that he "should be punished only for being a liberal."