Over the years, the cause of death of one of the most famous Hollywood celebrities Marilyn Monroe (Norma Jean Mortenson) remained a mystery. Most of the evidence and testimony obtained during the investigation has been destroyed or lost. But now, nearly half a century later, the world saw the new details of the actress' death. 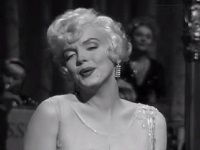 On August 5, 1962, Marilyn Monroe's body was found in the bedroom of her home in Brentwood. According to the autopsy, the investigation came to the conclusion that the death was caused by an acute barbiturate poisoning. Monroe's house was filled with listening devices, and surveillance was conducted on the day of her death. Witnesses said that a day earlier John and Bobby Kennedy came to visit her. There were screams and the sound of breaking glass, and a woman yelled: "Murderers! You are murderers! Are you satisfied now that she's dead?" Then it was quiet. It is argued that it was Bobby Kennedy who silenced Monroe forever, strangling her with a pillow.

In fact, while over a hundred books have been written about the life and death of the woman who was likely the most notorious sex symbol of the 20th century, not one of them has been able to penetrate the mystery, or at least fill the gap about the last minutes of Monroe's life.

According to eyewitnesses, August 4, 1962 was a pretty typical day in Marilyn's life. Pat Newcomb, her press agent, recalled that Marilyn, apparently, did not sleep well and was a bit annoyed. Monroe spent most of her day with her psychiatrist, Dr. Ralph Greenson, who noted a distinct change in the state of the actress, and explained it with Nembutal (a barbiturate). In the evening Joe DiMaggio visited her to discuss termination of his engagement and their possible reunion.

At 4:25 am on Sunday, August 5, the Los Angeles Police received a call. The caller introduced himself as Dr. Hyman Engelberg, Marilyn's personal physician. He said that the actress Marilyn Monroe committed suicide. When the police arrived at the house of the movie star, they found Marilyn's naked body next to a bottle of sedatives. According to the description of the scene, she was lying face down, her face buried in a pillow, her arms stretched out along her body, the right arm slightly bent, her legs straight.

The investigation immediately suggested that she was put this way by someone, because, in spite of the general concept, an overdose of sleeping pills usually causes cramps in the victim's leg and vomiting, and the position of the body is distorted. Witness evidence was very strange. They claimed that Marilyn's body was found before four o'clock, but they could not go to the police until so permitted by the advertising department of the "20th Century Fox Film Corporation."

The preliminary autopsy determined that Marilyn died of an overdose of barbiturates. Traces of pentobarbital (sleeping pills) were found in her liver, and chloral hydrate in her blood. The reason of Marilyn's death was identified as a "probable suicide."

The coroner based his determination of the cause of death as a "suicide" on traces of sedatives present in her blood, her previous suicide attempts, and lack of signs of violence. Some forensic experts did not agree. They argued that there were no traces of Nembutal in Monroe's stomach or intestines, and only in her liver, suggesting that Marilyn died of a rectally administered barbiturate enema.

Some experts argue a very convincing case for the accidental death of the celebrity. It is possible that her doctors, trying to wean Marilyn off Nembutal, gave her chloral hydrate. Chloral hydrate significantly slows down the metabolism and absorption of Nembutal. Doctors could not know when and what she took given that the drugs do not interact well. Almost every doctor makes serious and sometimes fatal mistakes when treating their patients. It should be also considered that during the day Marilyn frequently took drugs. Obviously, a theory of accidental death or murder is more exciting than other theories.

Celebrity status is more prone to criminal romance. Of course, it is important to distinguish between withholding of information by powerful people from committing crimes and eliminating people who can potentially create serious problems. There are a number of credible people who claim that Marilyn Monroe had an affair with one or both of the Kennedy brothers. According to Marilyn's trustee, Monroe had a real claim to the role of the first lady. Her letters and phone calls to Kennedy became tiresome and very risky. It is one thing to have fun with nameless girls, but quite another to have an affair with a sex symbol and celebrity. The actress could easily deprive both of the presidency because she knew about many private issues, or even issues relating to the national security. The influential brothers had their reasons to break off the relations with Marilyn forever. Therefore, it is possible that Robert was the man who tried to end the celebrity's relationships with the Kennedy clan.

According to Marilyn's friends, the relationships that developed between her and the two brothers and that were not previously known to the public were the talk of the town in Hollywood. Marilyn was often seen dancing or having an intimate conversation at private parties with Bobby or John. According to her close friends, Bobby fell in love with Marilyn, but the feeling was not mutual because Monroe's heart still belonged to his older brother, John. Sometimes, Marilyn and John would secretly meet during official visits of the latter and often spoke on the phone. Kennedy even got her a personal number so she could contact him through the Ministry of Justice. Marilyn's hopes for a future together with the president grew stronger, and she believed that John F. Kennedy would one day be able to divorce Jackie and marry her.

In 1962, she performed at Madison Square Garden at John F. Kennedy's birthday party, singing the famous "Happy Birthday Mr. President". The performance caused rumors in the crowd since the relationships were publicly demonstrated. The rumors about Marilyn and Kennedy began to actively circulate in the American society. There was a danger that if the relationships with the President and Marilyn continue, John could be drawn into a scandal.

In the summer of 1962, Marilyn was asked to stop all contact with the brothers, and their relationships came to an abrupt end. Marilyn was broken and fell into a deep depression. She even shared with friends that she would not mind telling the truth about her relationships with the Kennedy brothers in retaliation for the pain they have caused her.

A few weeks before her death, Marilyn's career and personal life, in a sense, were on the rise. She was invited to a number of new film projects and spent a weekend with Joe DiMaggio, and according to rumors they planned to re-marry. Unfortunately, next weekend Marilyn was found dead at her home in Brentwood. Her death was ruled a suicide by an overdose of sleeping pills. However, many still believe that she was killed because she knew too much. On the eve of the tragic events she was visited by Frank Sinatra who wanted to make sure that she was not going to cover the details of her relationship with JFK in the press. They say that gangster Sam Giancana threatened her for the same reason, and some unflattering photos of the actress were brought to light to blackmail her. Now everyone understands that the actual events that surrounded the death of Marilyn will never be made public. The only thing we know for sure is that the living legend mysteriously died in her prime, surrounded by mystery, scandal and uncertainty.