Rape and violence in India: Does anyone care?

Protests against violence against women are ongoing in India. Statistics show that rape has been the bane of Indian society over the past few decades. But it took terrible acts of violence - a rape and abuse of a student and a schoolgirl - to shake up the society. Expert Tatyana Shaumyan commented on the situation for "Pravda.Ru." 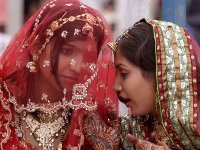 On January 15th, hundreds of people blocked a school where a day earlier a girl of seven was raped. The child's family did not hide their indignation by the fact that the crime was committed in a toilet near the principal's office. Residents of the Indian state of Goa demanded the authorities to immediately arrest the rapist. Head of state Manohar Parrikar assured the protesters that none of the criminals involved in the rape of the schoolgirl would go unpunished. The school principal was accused of negligence.

For many decades, sexual violence against women in India had been nearly the norm. In rural areas, rape is often kept secret to avoid embarrassment. Today, over 90 percent of Indian women feel unsafe. In the period from 1990 to 2008, the number of rapes in the country has more than doubled.

The true scale of the problem emerged recently, when the country has seen several high-profile crimes of sexual nature.

On December 16th, in the Indian capital, 23-year-old student Jyoti Singh Pandey fell victim of gang rape. The audacious crime was committed by young people in a private bus that picked up the girl and her male friend on the Outer Ring Road. The bus driver, his brother and a janitor, suspected of involvement in the rape and beating of the student and her companion, were soon arrested by the police. However, the heinous crime committed in the southern part of Delhi stirred up the entire country. Thousands of people marched to demand women's rights and punishment for the criminals. The demonstrators carried posters and national flags and chanted "We demand justice!" There were several clashes with police who used tear gas. During the unrest a journalist of a provincial newspaper died, and 35 protesters and 40 police officers were injured.

Tatyana Shaumyan, head of the Centre for Indian Studies at the Institute of Oriental Studies shared her thoughts about the situation with women's rights in India with "Pravda.Ru."

"Indian newspapers like Times of India, Indostan Times, often publish short summaries of rapes committed in rural village or settlement. But these cases are not a subject of extensive discussion. These facts are not news, unfortunately. The fact that it happened in the heart of Delhi, and the victim was a 23-year-old student, could cause a wide resonance. This was the reason for mass demonstrations that took place across the country," Tatiana Shaumyan said.

Following the announcement of the death of the 23-year-old Indian student who fell victim of gang rape in New Delhi, the authorities began hasty preparations for a new wave of unrest. Thousands of policemen were deployed, 10 subway stations were shut down, traffic on some major roads of the city was banned, Newsru.co.il. reported. However, the unrest became distinctly political. Many of the protesters did not hide their dissatisfaction with sluggishness of the authorities, who, in their opinion, were not quick enough in delivering justice and were not taking measures to protect women's rights. In January the trials of rapists were accelerated. On January 16th, the court in New Delhi sentenced 56-year-old Bharat Singh, convicted of rape and murder of a three-year girl, to death.

"Today the society requires the authorities of the country to create special legislative measures in order to protect women and ensure their safety. This is not just a physiological violence but the desire to humiliate the woman."

However, the situation with the rights of women in India cannot change overnight. It will take decades before the society overcomes many prejudices. It would seem that now, when India is celebrating 65 years of independence, women have all rights and freedoms under the Constitution. Women are traditionally respected in Indian society. Females are actively involved in political and cultural life of the country, they write books, make scientific discoveries. But, nevertheless, the expectations that women should stay home and not be active have always existed in India. First of all, people's psychology needs to be changed, and it has never be done through legislation alone," said Tatyana Shaumyan.