Let's imagine what Mata Hari could become had she not been executed on charges of spying. Initially, perhaps, she would continue dancing- after all it was her profession. Russian intelligence agent Anna Chapman was a businesswoman before she came to a police station in New York. After deportation from the U.S. to Russia she found herself not only in politics, but also in journalism and television. Her business acumen coupled with popularity allowed her making good money on revealing photos. But amidst all this fuss and hype Anna established a charitable fund "Right to Smile" to help blind and visually impaired children. 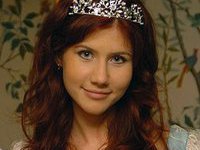 "People are more interested in art than pain," Anna Chapman said. "I realized that doing my charity work. This project brought together the team of people who care. And I believe that there are more good, caring people than indifferent or ill-wishing ones. Another thing is that not everyone can help. The worst is that charities' reputation has been ruined because for too long it had been used for personal gain and PR. I do not blame those who do not believe in charity, because they had been deceived for too long. At the same time, I am doing what I can.

In Volgograd, the fund is the only institution capable of helping children who urgently need to be treated for strabismus, providing a timely diagnosis, bringing new medical technologies, or updating the equipment in day care facilities. Most likely, nobody will build a school for the blind."

Those who help people, and especially children, deserve respect. It does not matter whether Chapman had failed her intelligence mission, or whether she was a secret service agent. What do all retired spies or agents do on their "retirement"? They say that talented people are talented in everything. Perhaps, due to the fact that intelligence is a creative process, secret service agents choose creative professions. On duty, they have to be business people, but at heart they are artists.

Illegal immigrant, secret service agent Joseph Grigulevich ("Max") used to be a foreign ambassador in Italy and the Vatican, and after successful completion of his job he became a prominent specialist in Latin American history and Catholicism. Joseph Grigulevich returned to the Soviet Union in late 1953, joined the party and engaged in scientific and literary work. Creative productiveness of Grigulevich who authored over 30 books and numerous articles caused envy of his academic colleagues who claimed that he used "literally slaves" to work for him from dusk till dawn.

Grigulevich published his first scientific monograph in 1957 and defended it as a thesis. Nine years later he received his doctorate degree, preparing a monograph "The Cultural Revolution in Cuba." Grigulevich was elected a corresponding member of the Academy of Sciences of the USSR, Honored Scientist of the RSFSR, and was a holder of many orders and medals. For other services to his country, he had military awards, including the Order of the Red Banner and Red Star.

Juozas Grigulyavichus (Lithuanian spelling) was born on May 5, 1913 in Vilna in a family of Jewish Karaites. According to the "legend" of the Soviet intelligence officer, he later had to present himself as a Lithuanian, Chilean, Mexican, and Costa Rican. In October of 1937, in a training house of NKVD outside Moscow in Malakhovka Grigulevich was prepared to conduct operations to eliminate opponents abroad. "It would be more appropriate to call Joseph a 'failed liquidator' ..." said the author of the latest biography of the famous secret agent Neil Nikandrov.

During preparation of the operation to murder Trotsky in Mexico in which Grigulevich aka "Felipe" took active part, he met 23-year-old Laura Araujo Aguilar. The elementary school teacher became the girlfriend and then wife of the spy. Neil Nikandrov wrote that Joseph and Laura lived together for nearly 50 years. They had to go through a long pursuit of the FBI, two-year separation,  premature death of their six months old son in Rio de Janeiro, intelligence epic in Italy at the height of the "cold war", "life from scratch" in the 1950-60's in Moscow, and vicious persecution of the early perestroika years. They overcame these ordeals together.

Grigulevich's years of work in Italy have been repeatedly called his best. Through his ingenuity and operational improvisation, the Soviet spy became an ambassador of Costa Rica in the Apennine peninsula, though he had never been to this Central American country. "Max" with a passport in the name of Theodoro Bonnephil Castro and his wife Louise under the name of Inel Idaliny arrived in Italy on tourist visas and settled in a modest hotel near the center of Rome. The "Latin American" couple was able to convince the consul of Uruguay to grant them a permit for permanent residence in the country. The Consul even nominally made Theodoro Castro a secretary of the consulate. He instinctively felt that the enterprising Costa Rican would acquire a successful business and counted on private limited participation in the profitable business of the entrepreneur.

"Max" did not only became rich on coffee trade, but also earned a good reputation among traders. When in October of 1950 a group of politicians from Costa Rica came to Italy, one of the consuls thought of Castro. When Grigulevich was invited to a meeting with the former president of Costa Rica, José María Hipólito Figueres Ferrer, the agent did not have time to consult with the Center. "I've never been to the Costa Rican "homeland," remembered Grigulevich. "My knowledge of this country was based on popular guidebooks and information drawn from interviews with two or three "compatriots." There was a danger that I would seem suspicious and Figueres starts an investigation."

After hearing the details of Castro's biography (or spy "legend"), Figueres, who in his homeland was respectfully called Don Pepe, exclaimed, "We are related! Your father was the nephew of the husband of my mother's aunt! Where have you been all this time? " Castro "honestly" revealed that he was an illegitimate son, and did not want to let his father down. Two months of almost daily interaction and joint trips around Italy brought the two extraordinary people together and made them friends.

Castro co-founded a trading company dealing with selling Costa Rican coffee in Europe. "Max" thought of the advertising slogan: "Coffee from Costa Rica will enrich your dreams." One of the secret service veterans later recalled that during an impromptu contest among former Soviet spies Grigulevich won by writing "the best essay on the coffee in the Soviet literature."

When Castro gave a bag of coffee beans to Roman Pope Pius XII, the businessman was noticed by the Pope's nephew, Prince Giulio Pacelli, Nuncio of Costa Rica. After selling the first batch of coffee to the Vatican at a discounted price (with solid profits for Pacelli), Grigulevich became a regular supplier of the Pope. "Max" impressed Borgonchini Cardinal, head of the police service of the Vatican so much that the latter presented him a gift of his "Research on the exact date of Christ's birth."

Meanwhile, on behalf of Figueres, Castro wrote a political election program for him. In a somewhat "corrected" form the program was adopted at the Congress of the Costa Rican National Liberation Party (Partido Liberación Nacional). Figueres once again became the President of Costa Rica in democratic elections and offered his commercial partner to become a political representative in Europe.

"My program has resulted in Figueres's coming to power in 1953," confessed Grigulevich. "He was ungrateful. I was never appointed Vice-president ". Instead, on May 14, 1952 Grigulevich as the Ambassador of Costa Rica presented his credentials to the president of Italy. Concurrently, he represented Costa Rica in Yugoslavia. Grigulevich's encyclopedic knowledge helped him make good acquaintance with nearly all the ambassadors and envoys from Latin America. With some he discussed the intricacies of monumental painting or problems of Amazon, with others - genealogy of the Inca emperors or history of the mission of Catholic religious orders. He did not build a relationship only with the Chilean ambassador, who during World War II was an ambassador of the Third Reich and was friends with the Nazi bosses. Grigulevich quite rightly suspected him of complicity to bring fascist leaders to Latin America.

Grigulevich was elevated to the dignity of knighthood and received the Order of the Maltese cross. Despite his success overseas, Joseph Grigulevich was recalled to Moscow in late 1953.

Before a spy could be an artist, diplomat, scholar, businessman, or scientist. Now a spy can also be a philanthropist.