Europe in crusade against burqa

France and several other European countries declared war on the burqa. Residents of the Old World can be somewhat understood. But there is another side of the coin: this garment allows escaping from the cruel everyday life of immigrant areas. In addition, up to 25 percent of those wearing burqa are native-born Europeans, therefore, a mere ban will not solve the problem. 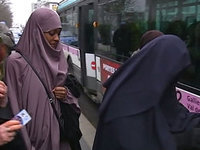 Burqa in the old days for me was a phenomenon from another, almost unreal world. I knew of it from the reports from Muslim countries such as Afghanistan or Saudi Arabia, as well as Soviet films about the struggle against Basmachis in Central Asia.

Oddly enough, I had to find myself in modern France to see women veiled from head to toe. Riding in the same elevator with them, walking next to them on a sidewalk was somewhat surreal for me. I wonder what the French or residents of other Western European countries brought up on the ideas of individual freedom feel looking at the female phantom, representing the impersonal world of obedience?

An attempt to explain the emergence of burqa in European cities by religious fanaticism of their owners and their submissive obedience to the will of men would be simplistic. Incidentally, in France residents of immigrant areas where most Muslim immigrants from Maghreb live were the first ones to begin an active opposition against the spread of patriarchal traditions, machismo and sexism.

The straw that broke the camel's back was a glaring case in October of 2002 in Vitry-sur-Seine where a 17-year-old Sohan Benzian was burned alive. Her murderer was a 19-year-old boy who decided to arrange a demonstration massacre of the girl who rejected his advances. In early 2003, France saw resonant marches and demonstrations under the slogan "Women of the working quarters against ghettos and for equality." In the wake of protests in 2003 feminist organization "Neither prostitutes nor slaves" (NPNS) was established. It opposes all forms of violence against women, obscurantism and promotes emancipation.

The adoption in March of 2005 of the law on the initiative of Jean-Pierre Raffarin government banning wearing of demonstrative religious symbols, including Muslim headscarves, in public schools, was no accident. It perfectly fit into the demands of the society and time.

France was not alone in its struggle against burqa. Similar laws have been already adopted or are in the process of adoption in the Netherlands, Belgium, Denmark, Italy and Germany (in eight of its lands). As for Spain, so far the ban is in effect in Barcelona. Switzerland refrained from such bold steps for economic reasons: it did not want to scare off the very wealthy customers from Arab countries. However, in November of 2009 this country introduced a ban on minarets construction.

Also read: No minarets and Islam for Switzerland, please

There are several quotes that explain the position of European politicians and their motivation. "People should be able to see each other's faces and identify them at a meeting," stated a special communique of the Ministry of Internal Affairs of the Netherlands.

German liberal and Deputy Chairman of the European Parliament Silvana Koch-Marin, advocating for the ban on burqa within the entire European Union, said that burqa was "an attack on women's rights, a mobile prison." According to the former President of Germany Christian Wulff, in Europe burqa is seen as a sign of closeness. It calls into question one of the principle of equality between men and women. One of the signs of an open society is the willingness to show the face.

As expected, the adoption of the French law in 2010 on the dress code has caused mixed reactions in the community. Association "Neither prostitutes nor slaves" embraced it with enthusiasm. Its president Habshi Seaham said: "This is a new page in the emancipation of women from working class districts, which will offer something opposite of isolation and social death."

Representatives of another association, "Do not touch my Constitution," saw electoral issues in the law and took a very different position. First, they initiated a campaign of civil disobedience with the participation of women wearing burqa. Second, they created a monetary fund and pledged to compensate them all fines. And third, they resolved to bring the case to the European Court of Human Rights.

"Personally, I do not support wearing of burqa," said association spokesman Rashid Nekkaz, "but I am against the fact that fear of Islam is used to narrow the field of freedoms in this country." Interestingly, both associations are based on a common policy to defend the principles of individual freedom and secular state.

At the sight of such a heated debate one would suggest that the entry into force of the "anti-burqa 'law in France will be followed by a "witch hunt." Nothing like this has happened. The leaders of relevant departments have given instructions to police officers and gendarmes to act "without fanaticism." They would not take burqa off women's faces or use other forms of violence, which may come as a shock not only to the Muslims but also the rest of the French.

Besides, the entire France with its 65-million population has only 1,900 women who wear burqa. Cases involving court and the imposition of fines can be counted on the fingers of one hand.

As shown by sociological studies conducted by the parliamentary group before the adoption of the law, half of the burqa-wearing women live in the Paris region, two-thirds are of French nationality, 90 percent have not yet reached the age of 40, and about one-quarter were converted to Islam.

A study ordered by the Open Society Institute founded by U.S. billionaire George Soros polled the wearers of burqa. 27 of 32 respondents are under 40. Many of them are well educated. In particular, 14 hold a bachelor's degree, and five have advanced degrees. However, only 10 of them work, although all of them would like to find a job. For the vast majority of them wearing burqa is the result of personal choice, without any undue influence from outside.

In addition, their choice often poured into an open conflict with other family members. Explaining her motives, one of the women said that for her it was "the path to follow."

The adoption of laws that contradict the Islamic dress code makes those wearing burqa face a difficult choice. Which option is better: 1) change the religious attire for civilian clothes, in spite of spiritual aspirations? 2) stay home in a voluntary confinement? 3) leave the country? Empirical evidence shows that it is normally the first or second choice.

A thoughtful approach to the phenomenon of burqa in Europe is not in favor of simple and quick solutions. Those who know the life of immigrant areas with religious and ethnic isolation, crime and mutual responsibility, where drug gangs are operating in the open, where the laws are violated and the jungle law is the one effect, would hardly "throw stones" at women wearing burqa.

I would say that for them it is a form of escape from harsh reality, a protective veil against the fear and desperation, an attempt to find a firm island of faith in the aggressive environments. If the authorities in the European countries want to achieve real results in solving the problem with burqa, they will have to revise the immigration policies in their entirety, and without regard to the electoral process.